Concerns about the rising cost of college in the United States—and the $1.4 trillion in student loan debt nationwide—are alive and well.

And they’ve prompted a lot of discussion about the different ways our educational peers nearby, across the pond, and beyond handle student loan repayment programs. When it comes to tuition costs and paying off student loans, the American system is unique—and not for all the reasons you might think.

It turns out that cheap or even free tuition doesn’t mean the end of student loans. Student loans are common even in countries with free tuition, because no matter where you go to college, you have to live somewhere and, of course, eat.

Sweden gets a lot of attention because tuition there is free. Still, Swedish students borrow money for college just as frequently as Americans do—and about 70% of students in both countries have student loans. But Swedish students graduate with about $20,000 in debt, compared to about $30,000 for American graduates.

To explore how the rest of the world pays for learning, we looked at the most recent QS World University Rankings. Thirty-two of the top 100 schools are in the U.S. Another 32 are found in just four countries: the United Kingdom, Germany, Australia, and Canada. Below, we compare the way higher education is financed in all five nations, in descending rank order. 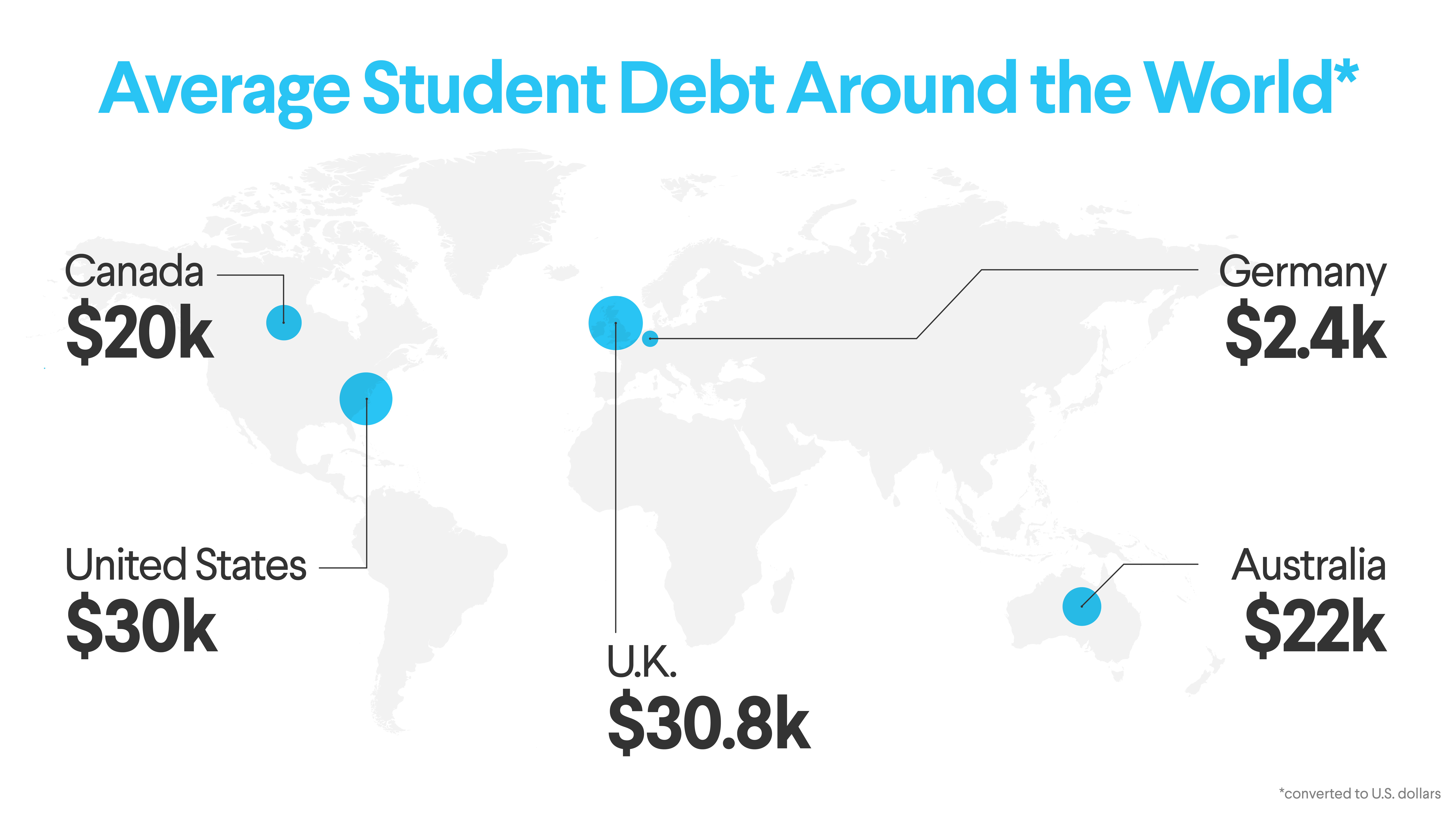 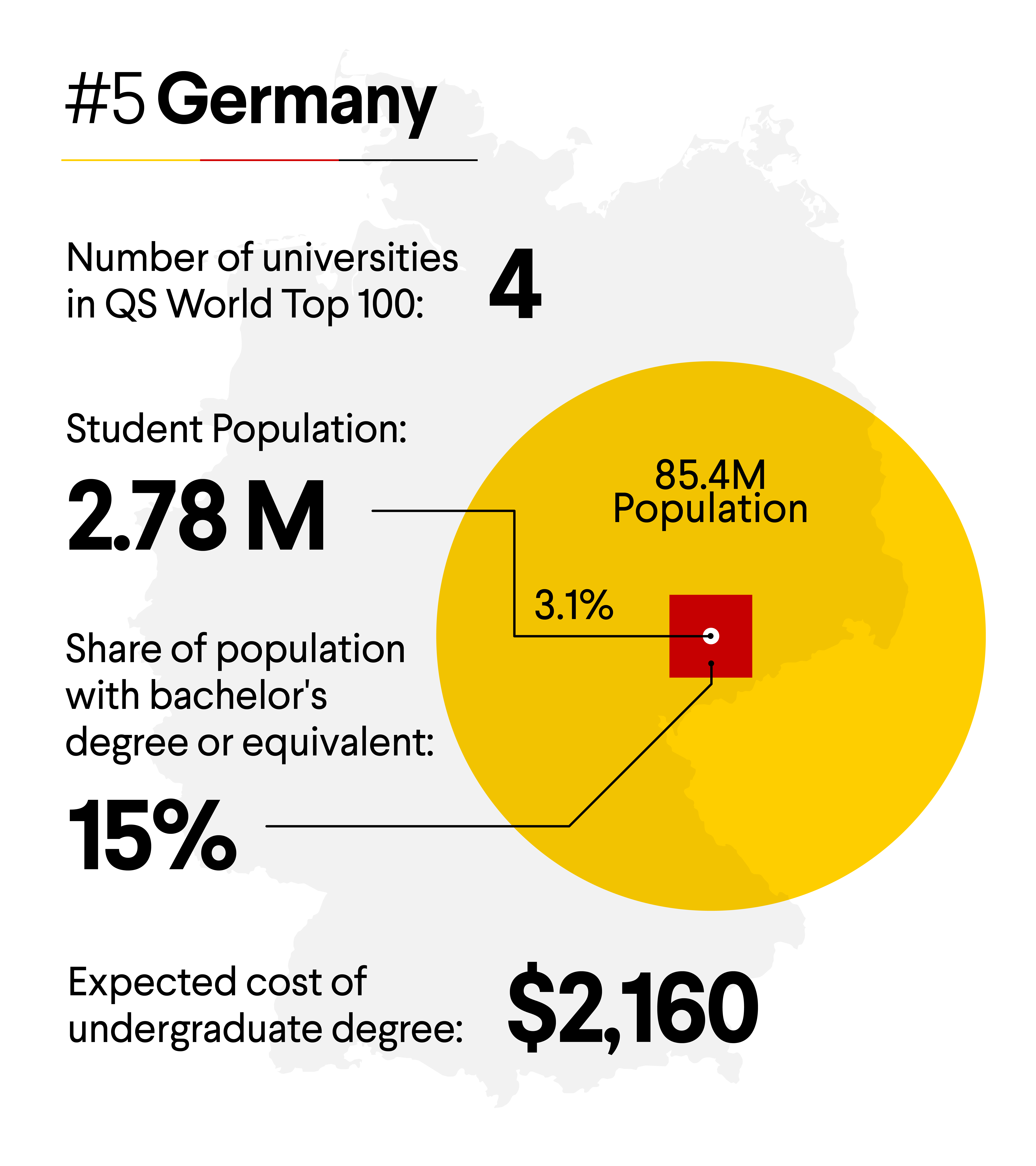 Germany’s public institutions have been largely fee-free for years. Do students get what they pay for? You decide: The United Kingdom is well ahead in the Top 100 count despite being a smaller country with about 400,000 fewer students. Germany also has fewer Top 100 schools than Australia, a country with half the student population.

On the other hand, come on—it’s free college! And employers don’t normally auto-reject you just because your degree didn’t come with a tuition charge.

Most courses are taught in German, although there are a handful of degree programs taught in English. What’s in it for Germany to let outsiders in to study for free? About half of foreign graduates stay in the country, bolstering the base of highly educated professionals. Germany has struggled with both economic and population growth in recent years, although not as much as many European peers, and higher education helps turn that tide.

Related: A Visual Timeline of Student Loans – Where We’ve Been and Where We’re Headed

As of today, Germany’s undergrad programs really are free for everyone, but that’s changing. Later this year, one of Germany’s states will reinstate fees of about $3,200 annually for non-EU citizens.

Private schools and some post-graduate programs have far more significant tuition costs, however. And there are a few other costs to contend with regardless, including minor administrative fees that can total around $600 per year.

In Germany, parents are required to financially support their children even while they pursue post-secondary education. Therefore, German students are a lot less likely than U.S. students to take out loans. As of June 2016, just 18% of German students were dealing with student loan debt.

And those who do borrow have income-based repayment, with all debt forgiven after 20 years. On top of that, the German Federal Training Assistance Act provides a modest living subsidy for lower-income students. 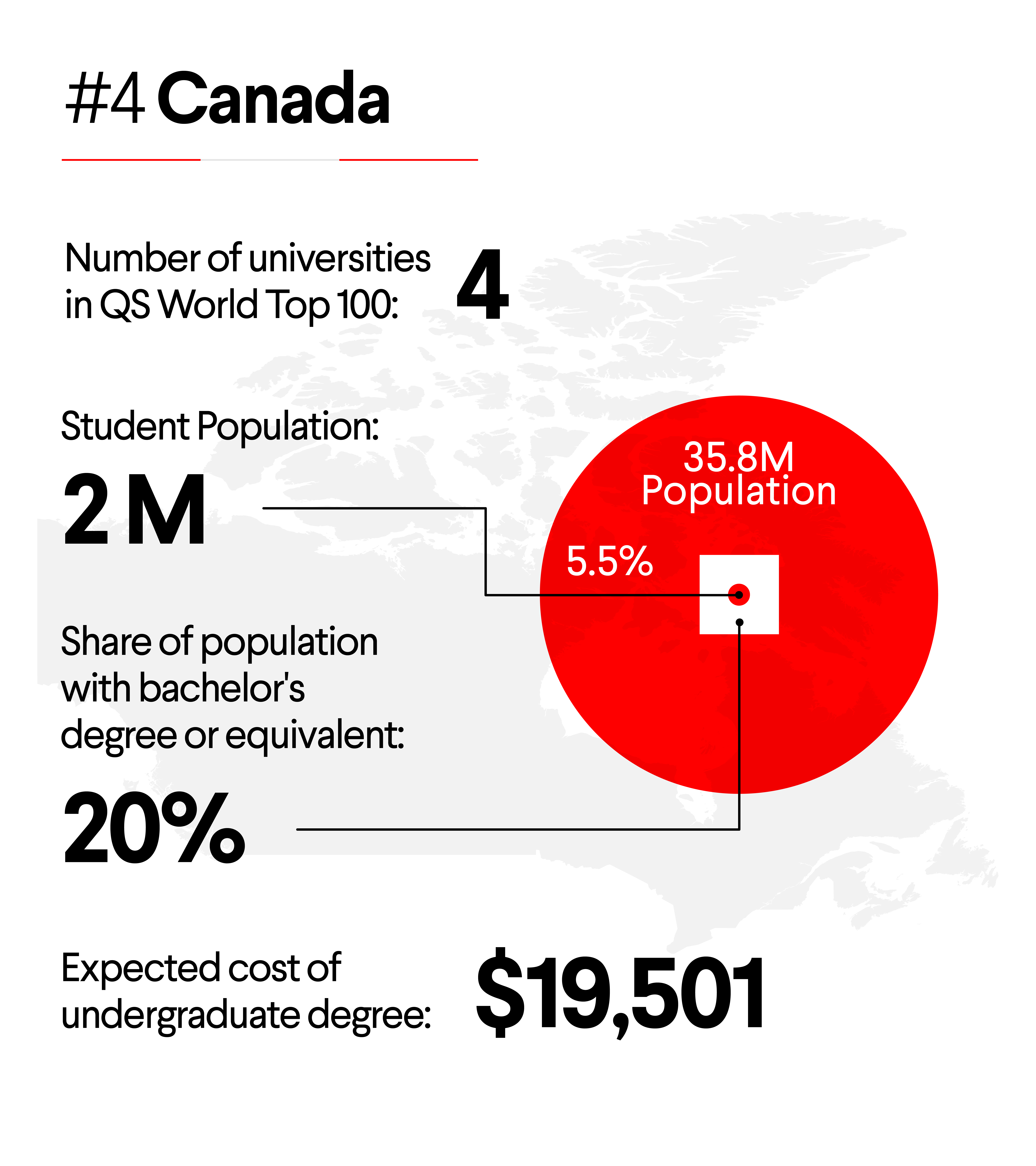 Canada’s top universities—and we do mean “universities”—may not be household names in Middle America, but they’re still among the world’s best. In the U.S., the words “college” and “university” are used somewhat interchangeably in conversation, but in Canada and most other countries they are distinct. A Canadian “college” most closely parallels a two-year institution in the U.S., although some offer bachelor-level degrees in limited fields of study. That’s an important distinction, because job opportunities continue to favor university and post-graduate study. Over the past eight years, 73% of Canada’s advanced new jobs were aimed at university graduates rather than college or trade school grads.

At first glance, Canada’s student loan system looks similar to the American system. There’s a nationwide government system, the Canada Student Loan Program (CSLP), which allows students to borrow up to 60% of their tuition, and private lenders can help with the rest. Students definitely take advantage, with the average borrower leaving school with debt of CAD $26,819 (US $20,114).

A recently passed national provision suspends student loan payments until graduates earn at least CAD $25,000 (about US $18,750) annually. Private loans are available, but are most commonly pursued as add-ons to government support. Students can choose between fixed or floating interest rates.

Plus, there’s a great deal of extra financial help for medical professionals willing to travel. Canada will forgive $8,000 per year in loans to doctors, and $4,000 per year for nurses and nurse practitioners who work at least 400 hours in a Canadian remote or rural community. With Canada’s far-flung population, there are a lot of those communities. The benefit can be claimed for a maximum of five years. It’s not quite free med school, but it’s not bad. 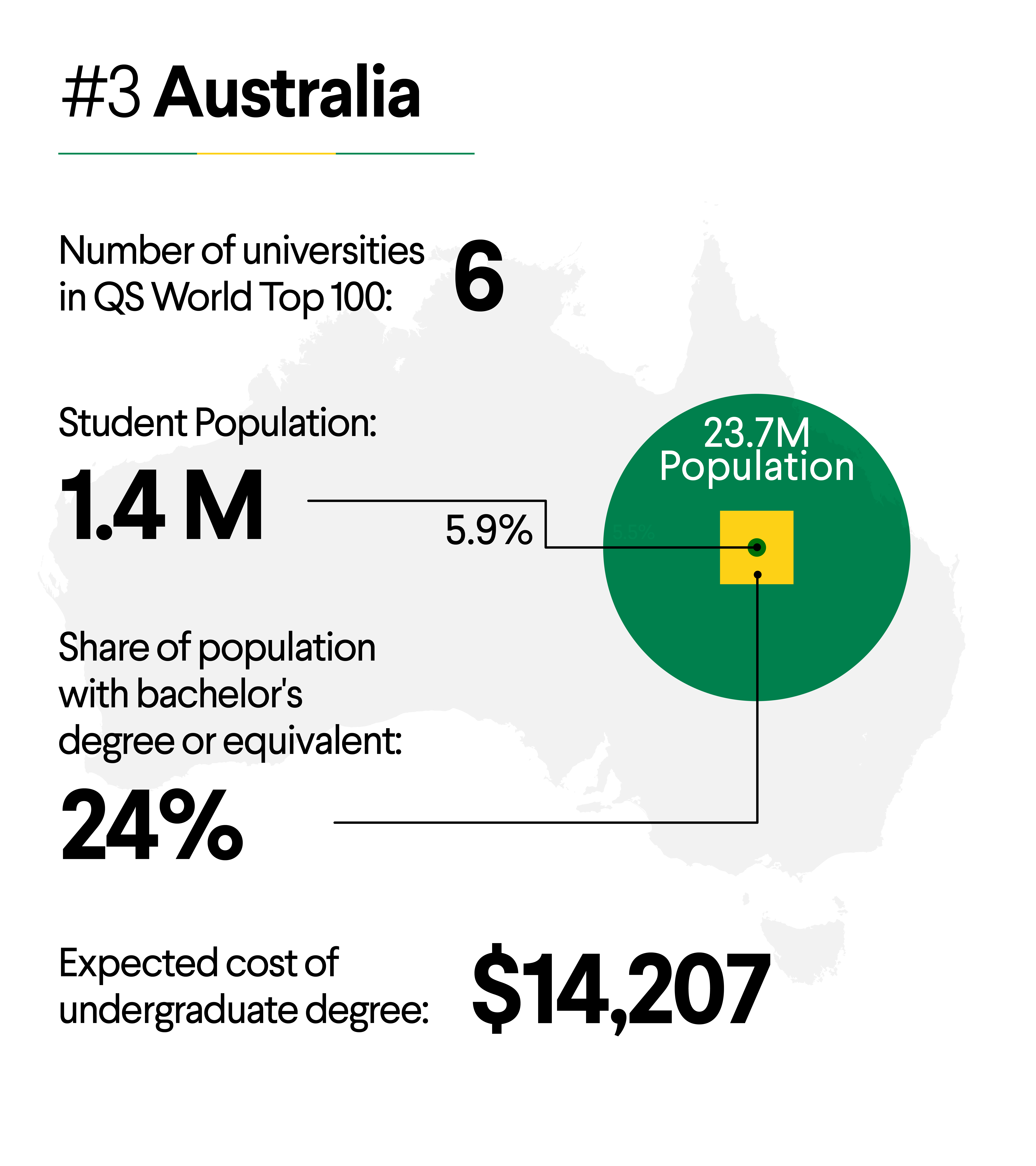 Of the five countries on this list, only Australia comes close to the degree of complexity in paying for college “enjoyed” by Americans. Private loans are available, but the government is the lender of first resort. The details are pretty elaborate, but if you qualify for a Commonwealth-supported place, you receive significant government subsidies against tuition and fees. (Most Australian and New Zealand citizens qualify for this support.) Australians shoulder a similar student loan burden to the other English-speaking countries on this list: an average of AUD $30,000 (US $22,000) per borrower.

The country uses a three-tier educational cost-sharing system for undergraduate study. Students pursuing high-income professional degrees in fields such as medicine, veterinary science, and law are expected to contribute more than those in the second band, which includes many health-related fields and technology degrees. In the bottom tier are fields like the humanities, education, nursing, and the performing arts.

Government loans are available to students regardless of personal or family financial means. Some of Australia’s student loans are interest-free, while others index interest to inflation. Typically, graduates don’t make payments unless they earn more than AUD $54,869 (about US $41,480) annually. For those making more, repayments start at 4% of income and increase to a cap of 8% of income.

Graduate studies in Australia are considerably more expensive than undergrad, but government loans are available to cover as much as $84,000, depending on the field of study. The repayment scheme is the same sliding scale as the undergraduate loans. 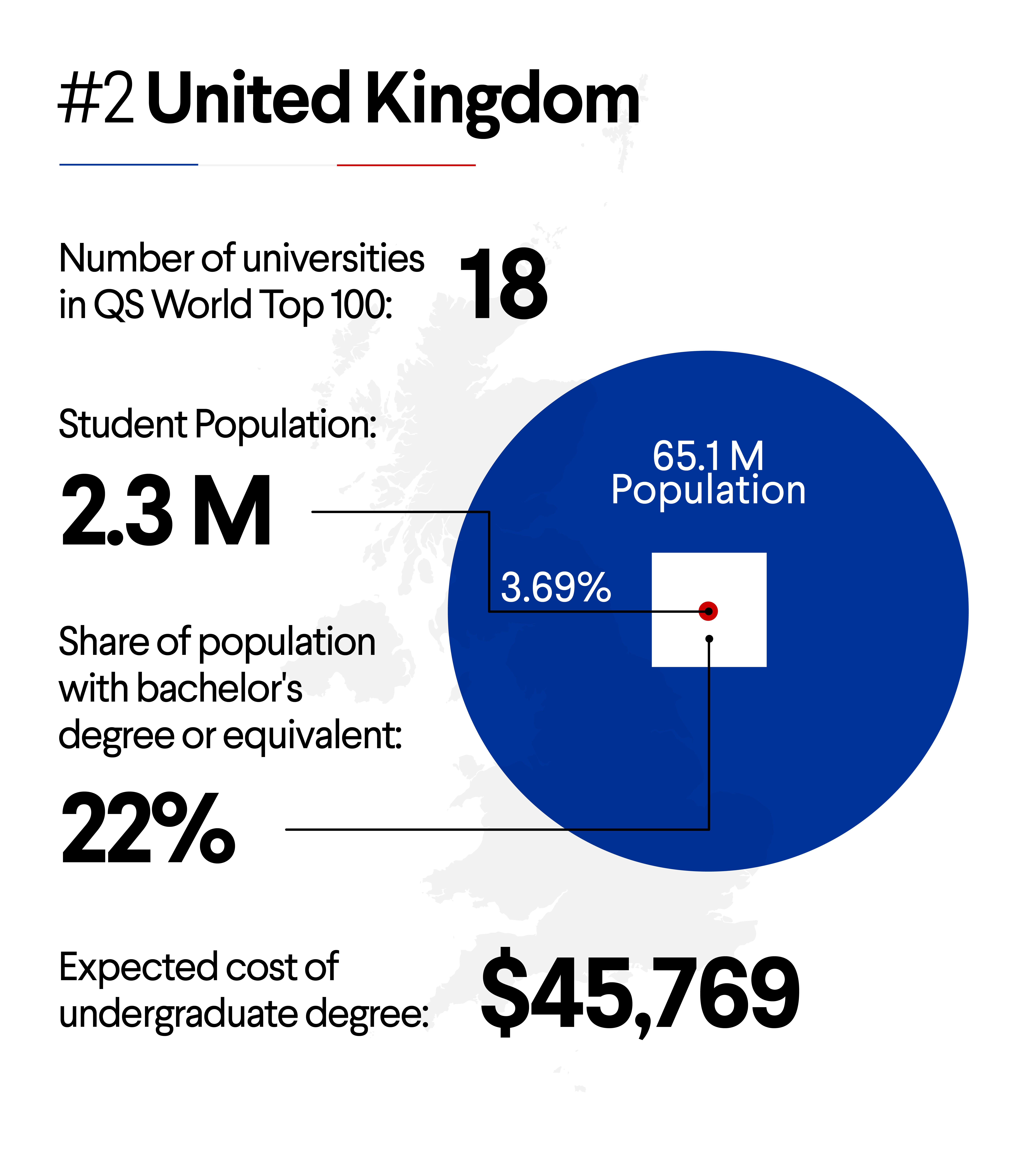 Want to attend one of the heavy hitters in London? It’s one of the world’s priciest cities, so you can expect to add several thousand dollars per year to the estimated tuition cost. And in Scotland, there are no tuition fees at all, including at University of Edinburgh (ranked #19).

Educational courses are sometimes more compressed in the UK than in the U.S., meaning you can graduate faster and, therefore, with less expense. Medical schools accept students directly out of secondary education programs and typically run five years total, instead of the seven- or eight-year commitment for both pre-med and medical school in the U.S.

Student loans in the UK operate on an income-contingent repayment system, meaning that the more you earn after college, the more you pay each month. Repayment doesn’t start until income exceeds £19,250 (US $25,977), and debts are automatically forgiven after 25 years.

If you’re wondering how lending money with automatic forgiveness can pay off, the answer is, it doesn’t—at least not directly. In the UK, the Office of Budget Responsibility estimates that 25% of student loan debt issued after 2012 will never be paid. 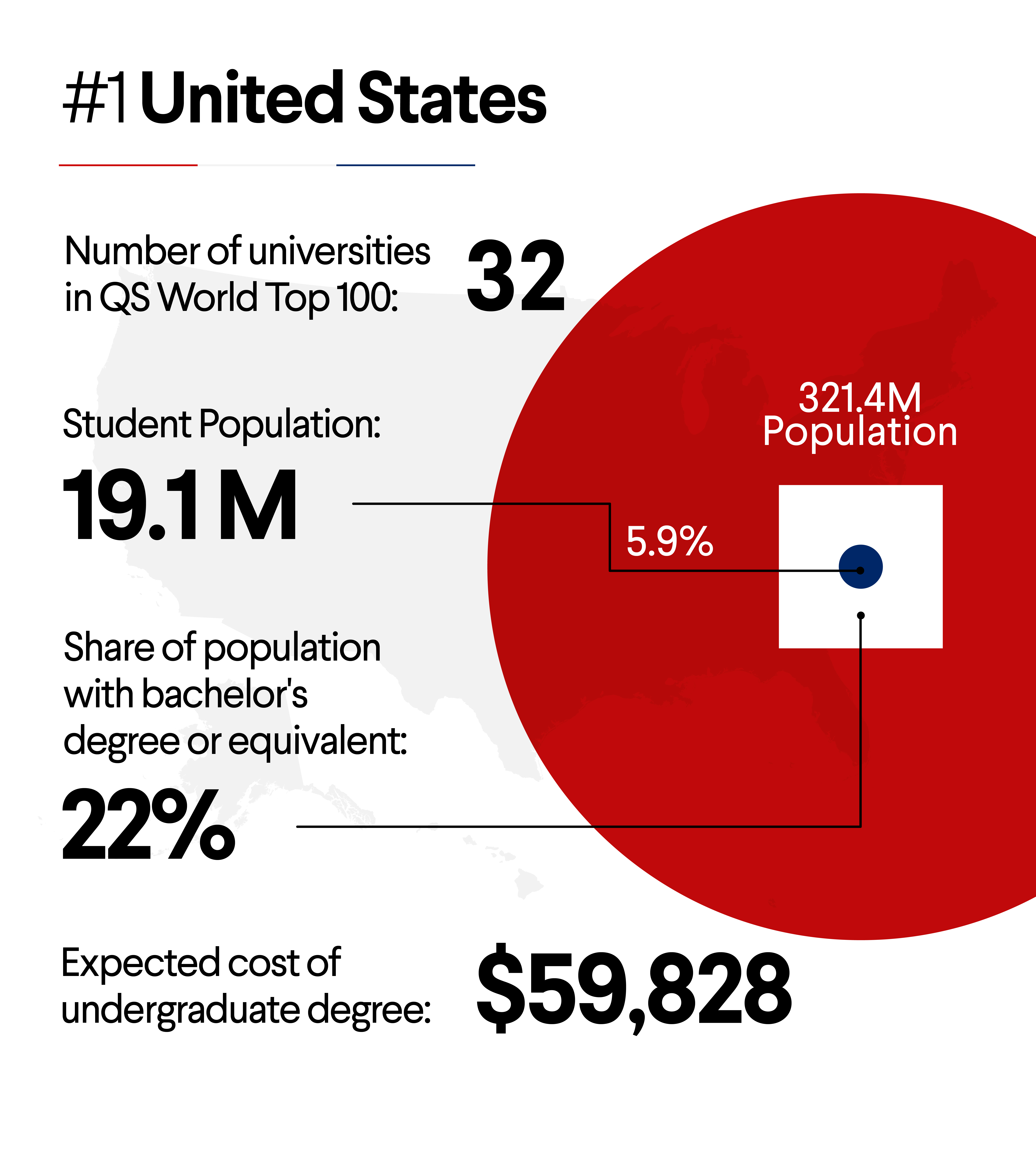 Higher education costs in the U.S. can be slippery because of the “sticker price” problem: Scholarship, grant, and tax incentive programs available to many students whittle the real cost down to half, or less, of the stated annual tuition, room, board, and fees. It’s difficult to reach conclusions based on the National Center for Education Statistics’ average listed tuition for a single year at a four-year institution of $14,957. Plenty of public universities charge students considerably less. Top-flight universities are much, much more expensive—except when they aren’t (due to need-based grants and other allowances).

Recommended: How and When to Combine Federal Student Loans and Private Loans

Some programs, such as the Public Service Loan Forgiveness (PSLF) plan, exempt forgiven loan balances from income tax. PSLF also requires regular and timely payments over a 10-year period of employment in public service. But forgiveness is not an easy bar to clear, and PSLF forgiveness doesn’t count as income for tax purposes.

Most other kinds of student loan write-offs in the U.S. do lead to an income tax bite, however. For comparison, in the UK student loans are forgiven after 25 to 35 years, depending on the loan type, and in Germany the wait is 20 years.

Ready to set an example for the rest of the world and take control of your college (or university) debt? Check out your rate to refinance your student loans.

GDP growth rate and unemployment rate data is from the Organisation for Economic Co-operation and Development (OECD).

Share of population with education data is also from OECD, which examined those age 25 through 64 in each country. OECD uses the term “tertiary education” to refer to postsecondary education, which is roughly comparable to the U.S. college and university system.

Quality of Life ranking from US News and World Report 2016 rankings.