US stocks declined in trading Monday, as concerns intensified that Beijing will not bail out China Evergrande Group (EGRNF), a Chinese real estate company which warned last week that it cannot pay back its debt. The company has the largest debt position of any publicly traded real estate management or development company. If Evergrande fails it will result in massive losses for investors and bondholders.

Evergrande’s troubles come as investors are growing more concerned about whether stocks will be able to rally after a strong year so far in 2021. With valuations rising and signs emerging that economic recovery in the US may be slowing, investors sent stocks lower Monday.

As investors sought out safe havens yesterday, oil prices declined and Treasury yields fell while the dollar gained strength. Bitcoin also traded lower, as did tech and financial stocks. Investors are now looking more critically at the broader property sector and the impact an Evergrande failure will have on the rest of the industry.

Regulators in China are putting pressure on real estate companies including Evergrande to lower their debt exposure as they try to cool off the red-hot real estate market in the country.

Is This China’s Lehman Brothers Moment?

Evergrande has about $300 billion in debt coming due, which is prompting some industry watchers to warn that its collapse could be China’s “Lehman Brothers moment.” In 2008, Lehman Brothers, the Wall Street firm, filed for bankruptcy, which was a big contributor to the global financial crisis.

At the very least, the problems at Evergrande are expected to have a spillover effect in the real estate sector and other parts of China’s economy. Concerns about the company are already having an impact on stock markets across the globe. With a potential collapse of Evergrande, investors are bracing for even more volatility in the coming days.

A Deep Dive into the FAFSA ®

Do you know a high schooler preparing for college? If so, we want to maximize their chances of being as financially prepared as possible.

We'll deep dive into the timing and approach to completing the FAFSA, the top do’s and don’ts, and we'll review the most common questions we receive from parents about the FAFSA. Join us on the 29th at 5pm PT to learn more! RSVP now. 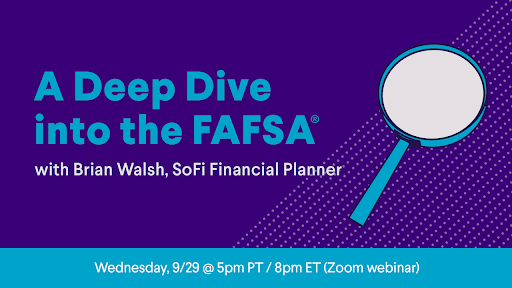 Toy Supply May Be Lower This Holiday Season

Walmart (WMT), Target (TGT), and other retailers are racing to stock up on toys as strong demand and shipping delays threaten to leave store shelves emptier this holiday season. The inability to get toys to retailers ahead of the holidays because of logistics snafus also threatens profits for Mattel (MAT), Funko (FNKO), and other toymakers.

As it stands, the holidays are a big contributor to the toy industry’s $33 billion in annual sales. Spending during the 2021 holiday season is expected to be strong given pent-up demand after lockdowns last Christmas season. In the first seven months of this year, US imports of dolls, games, and toys doubled compared to 2019, hitting $1.88 billion per month. This marks a record for the industry.

Companies Get Creative With Logistics

To ensure toys reach store shelves in time for the holidays, toymakers are getting creative. Toy companies including Funko and MGA are routing shipments to less congested seaports, using cargo planes, and asking some retailers to figure out their own shipping.

Meanwhile, Walmart and Target have contracted their own ships and Macy’s (M) began placing orders for toys three months earlier than it typically would. The department store operator just announced a deal to open up Toys “R” Us sections in over 400 stores next year. Macy’s has already started selling some toys through this partnership.

Stock Is Okay For Now

Flying in products is costly for the toy manufacturers and retailers, but it can save precious time leading up to the holidays. Delays for cargo ships are lasting anywhere from days to months. However, toymakers are also facing difficulties with transporting products by air. For the first seven months of this year, shipments into the US via cargo planes were more than double what they were during the same period in 2019.

For now, stores are fully stocked with toys, but retailers will have a difficult time keeping that up as the holidays approach. Shipping disruptions due to COVID-19 outbreaks and overbooked cargo ships could prompt more delays in the coming weeks. If these trends keep up, some retailers could be in for a blue Christmas.

DoorDash Gets Into Alcohol Delivery Market

DoorDash to Deliver Alcohol in 20 States

DoorDash (DASH) is getting into the alcohol delivery market as competition with Uber (UBER) heats up. On Monday DoorDash announced customers can order alcohol via its app in 20 states in the US, the District of Columbia, Canada, and Australia. The service will reach over 100 million customers across the globe.

DoorDash is expanding into alcohol as a way to increase usage of its app and boost the average order value. According to the company’s leadership, wine, spirits, and beer can increase average order values by 30%. The new feature also helps restaurants sell more and helps delivery people make more money.

DoorDash’s decision to add alcohol comes as competition in this area is heating up. Demand for wine and beer deliveries exploded during the pandemic and remains high today. In 2019 ecommerce accounted for 1% of alcohol sales by retailers in the US. Analysts project that by 2024 that will be up to 7%. DoorDash is not alone as it tries to gain a piece of this growing market. For example, in February 2021, Uber spent $1.1 billion to acquire Drizly, a alcohol-delivery startup.

This is not DoorDash’s first foray into delivering wine and spirits for restaurants. It has delivered alcohol through DoorDash Drive, which delivers orders placed on restaurants’ websites. However, this will be the first time customers can order directly from the DoorDash app.

Customers 21 years of age or older can scroll through DoorDash’s alcohol tab to order a selection of wine, beer, and cocktails from one of its 10,000 partners which include restaurants, grocery stores, and convenience stores. The buyer’s ID will be checked in the app and when the alcohol is delivered. The service is only available in select markets since laws around delivery of alcohol differ between locations. DoorDash has joined the restaurant industry in lobbying for help in easing restrictions.

DoorDash’s entrance into alcohol delivery proves that many pandemic trends are here to stay. It will be interesting to see how the market evolves and what impact DoorDash will have.

“It is recommended that you fill out your FAFSA® as close to October 1 as possible to give you a good chance to get access to available funds. Need-based aid is awarded on a first come, first served basis, so it is in your best interest to apply as soon as possible.”

Please borrow responsibly. SoFi private student loans require things like credit qualification and agreement, completion of a loan application, verification of application information, the student’s enrollment at a SoFi-participating school, and if applicable, a co-signer and self-certification form. In addition, borrowers must meet SoFi’s eligibility and underwriting requirements. See SoFi.com for more information. This information is current as of 09/20/2021 and is subject to change.