Today, the Federal budget for August is released. This tracks spending on the part of the Federal government each month. In July the government reported a $302 billion deficit, which was a record for the month. Continued COVID-19 relief spending was the main cause of the shortfall.

On Tuesday, the Commerce Department releases the consumer price index (CPI) for August. In July the CPI jumped 5.4% year-over-year, driven by pent-up demand for goods and services. For August, investors will be paying close attention to see if demand is slowing as the Delta variant of COVID-19 continues to spread. Also Tuesday, the Core CPI and the NFIB small business index for August is released.

On Wednesday, be on the lookout for the import price index for August. This tracks the average changes in the prices of goods and services imported and exported in a given month. In July, US import prices saw 0.3% growth, marking the smallest gain since November. August is expected to show more of the same.

On Thursday, initial and existing unemployment claims for the week prior are released. Unemployment has steadily declined even as COVID-19 cases continue to rise. Investors will be paying close attention to make sure the trend continues. Also Thursday, retail sales for August are released. If the decline is more than the 1.1% expected, it will raise concerns for investors about the Delta variant’s impact on the retail industry.

On Friday, the University of Michigan releases its preliminary Consumer Sentiment Index numbers for September. This metric tracks how consumers are feeling about their finances and the economy. In August the index came in at 70.3 which was a lot lower than the 81.2 reading in July.

On Tuesday, be on the lookout for earnings from FuelCell Energy (FCEL), a company which designs, manufacturers, and manages fuel cell power plants. Early this month Hyundai Motor announced its intention to develop hydrogen fuel cell-powered commercial vehicles by 2028. That follows an announcement from BMW, which in June said it was testing cars with hydrogen fuel cell drivetrains. It will be interesting to hear what FuelCell Energy has to say about the recent developments in the market when it reports earnings.

On Wednesday, Jinko Solar (JKS) reports quarterly earnings. The solar module manufacturer, which distributes panels in China, the US, Japan, the UK, and a host of other countries, recently inked a multi-year polysilicon supply agreement with Wacker Chemie. The deal helps Jinko Solar address polysilicon supply shortages, which have driven up the price of solar panels. Investors will be looking for any signs supply shortages are abating when it reports quarterly earnings.

On Friday, be on the lookout for insurer Progressive (PGR) to report quarterly earnings. The personal auto insurer has been facing loss ratio pressures as the number and size of claims rise. That may prompt Progressive to cut back on the amount it spends on advertising, with larger decreases coming in states where it can’t raise premiums. Investors will want to hear more about how it will respond to loss ratio pressures in the coming months when it reports earnings.

Join us for a discussion on navigating your career in the ever-changing work world, then get tips on balancing work and parenting. Also, tune in for Your New Dollar.

Register for webinars in the SoFi app. 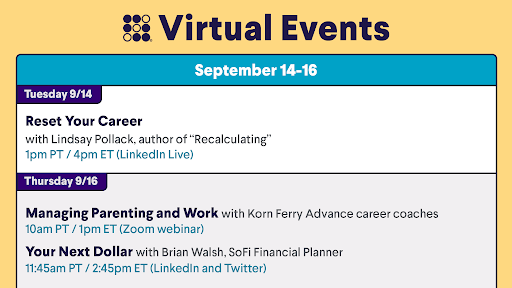 Grubhub (GRUB), Uber (UBER), and DoorDash (DASH), are suing New York City, arguing that caps placed on the fees they charge restaurants for delivery are unconstitutional. The lawsuit is in response to a law put on the books in New York which permanently limits the commissions delivery apps can receive. Grubhub, Uber, and DoorDash say the law has cost them hundreds of millions of dollars.

The lawsuit comes amid more scrutiny of food delivery companies, which gained in prominence during the pandemic. With restaurants shut down, many turned to delivery to survive. Now, some cities want to ensure that Grubhub, DoorDash, UberEats, and other servicers aren’t harming restaurants by charging too much for their services. This is why caps have been put in place.

Grubhub, Uber, and DoorDash are seeking an injunction to stop New York from enforcing the caps. The companies are also seeking monetary damages and a jury trial. The food delivery companies argue that the law also interferes with contracts already negotiated with restaurants.

Consumers Could Stand to Lose

With restaurants reopened, app companies also contend that caps are no longer necessary. Many cities lifted the caps as restaurants reopened for business, while others, including New York and San Francisco, made them permanent. In June San Francisco became the first city to limit commissions on food delivery to 15%. In response GrubHub, Uber, and DoorDash sued.

The app companies are not the only ones that stand to lose if caps stay in place. Grubhub, Uber, and DoorDash said in the lawsuit they have been forced to pass on the cost to consumers when commissions are capped. That trend, the companies warned, will continue in New York and elsewhere where limits are in place. The outcome of the lawsuit will have big implications on Grubhub, Uber, and DoorDash’s bottom lines. It will be interesting to see what the court decides.

Vestas Wind Systems (VWDRY) and Siemens Gamesa Renewable Energy (GCTAY) have been left out in the wind during this year’s stock market rally. Supply chain slowdowns, rising commodity prices, and a decline in orders are keeping investors on the sidelines. Year-to-date, both Vesta Wind Systems and Siemens Gamesa Renewable Energy are down, underperforming the broader market.

Part of the decline in shares can be attributed to the bursting of the green stock bubble. Shares of clean energy stocks, including wind, had a strong run in 2020, but they have been selling off more recently. However, a bigger problem is rising cost inflation which makes it expensive for these companies to conduct business.

Take the producer inflation index, which surged in August, as evidence. Prices producers get for their goods and services increased 8.3% year-over-year last month, marking the biggest increase in more than a decade. In July the index jumped 7.8%. The data point is dashing hopes inflation will ease as we move through the remainder of the year.

In addition to rising raw material costs, wind turbine companies are contending with supply chain delays and higher shipping costs created by the pandemic. In the past year, logistics costs, which account for 15% of a turbine’s price, have nearly doubled. Those inflated prices are expected to remain in place through 2021. In addition to that, the wind turbine companies are facing a lull in demand after a strong 2020 driven by the end of incentives in China and the US.

The wind turbine market has not participated in the stock market rally of 2021 as the industry faces a perfect storm of rising raw material costs, supply chain delays, and a slowdown in sales.

“When shopping for refinancing rates, pay close attention to loan terms, which can vary greatly depending on the lender. The longer the loan term, the lower the monthly payments will be, but that means more interest will be paid over the life of the loan. Conversely, a shorter loan term may mean higher monthly payments, but then less is paid in interest over the life of the loan.”

Lantern by SoFi:
Lantern is owned by SoFi Lending Corp., a lender licensed by the Department of Financial Protection and Innovation under the California Financing Law, license number 6054612; NMLS number 1121636. ( www.nmlsconsumeraccess.org )

All rates, fees, and terms are presented without guarantee and are subject to change pursuant to each provider’s discretion. There is no guarantee you will be approved or qualify for the advertised rates, fees, or terms presented. The actual terms you may receive depends on the things like benefits requested, your credit score, usage, history and other factors.

*Check your rate: To check the rates and terms you qualify for, Lantern conducts a soft credit pull that will not affect your credit score. However, if you choose a product and continue your application, the lender(s) you choose will request your full credit report from one or more consumer reporting agencies, which is considered a hard credit pull and may affect your credit.