On Wednesday, be on the lookout for the Bureau of Labor Statistics to release job opening numbers for July. In June the US had 10.1 million job openings as businesses struggled to find workers. Investors will be paying close attention to July’s release to see if the worker shortages are beginning to abate.

On Thursday, initial and existing unemployment claims for the week prior are released. The unemployment picture has been steadily improving in recent weeks despite rising COVID-19 cases. Any uptick in unemployment numbers could raise concerns that the Delta variant is starting to impact the recovery.

On Friday, the Producer Price Index for August is released. This data point tracks the change in prices that domestic producers get for their goods. In July, the Producer Price Index lodged its biggest year-over-year gain in over 10 years. If this number is even higher for August, it could raise more inflation concerns. Also Friday, the revised number for wholesale inventories in July is released.

There are no major earnings reports slated to be released today.

On Wednesday, GameStop (GME) will report quarterly earnings. The meme stock skyrocketed earlier this year when retail investors joined forces to counter short sellers, betting on GameStop’s turnaround plans. Since then GameStop’s stock has fallen as investors have heard few details about its transformation under its new chairman, Ryan Cohen. The retailer’s last earnings conference call was brief.

Also Wednesday, Lululemon (LULU) reports quarterly earnings. One of the big winners of the pandemic, the stock has languished since setting new highs earlier in the year. That could reverse if the retailer meets Wall Street expectations for same-store sales to increase 36% in the quarter. Athleta, the workout brand owned by Gap (GPS), reported that net sales jumped 35% year-over-year in the second quarter, driven by demand for comfortable clothes.

On Thursday, Affirm (AFRM), the buy-now, pay-later startup, reported quarterly earnings. The company just announced a partnership with Amazon (AMZN), which sent its stock soaring. The ecommerce giant will allow customers to pay for items with interest-free installments through Affirm on purchases of $50 or more. Investors will undoubtedly want to hear more about the deal when Affirm reports earnings.

Also Thursday, teen-focused retailer Zumiez (ZUMZ) reports quarterly earnings. Zumiez is expected to be a big beneficiary of a strong back-to-school shopping season, driven by pent-up demand after last year’s shutdowns. However, that growth may have been hurt by the Delta variant of COVID-19. Investors will be paying close attention to Zumiez’s sales data.

To round out the week, Kroger (KR) reports quarterly earnings on Friday. The grocery-store chain has been a big beneficiary of the cook-at-home trend born out of the pandemic. But there are signs that pandemic growth is beginning to slow, even with the Delta variant spreading across the country. Investors will be paying close attention to what Kroger has to say about demand and COVID-19 when it reports earnings Friday.

Join us for SoFi’s End of Summer Chill with energetic activities and a virtual BBQ. Also, tune in for valuable resume tips, plus check out Your Next Dollar. Save your seat! 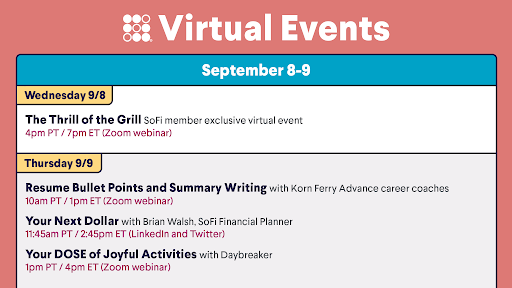 Ikea Tests Appetite for Secondhand Market in the US

Furniture retailer Ikea is testing a furniture buyback and resale program in the US, aiming to capitalize on younger consumers’ affinity for secondhand goods. Ikea is among the national retailers offering greener products to appeal to shoppers who want to do their part to protect the environment. Gap (GPS), Macy’s (M), Madewell, and other retailers are partnering with ThreadUp to resell clothing and test the market for secondhand apparel and accessories.

A recent survey of Gen Z shoppers found that 47% of teens have bought secondhand merchandise and 55% have sold it. Most of the interest has been for used clothing but Ikea is betting that secondhand furniture will also be a hit.

Ikea to Expand After Test

Ikea is launching a pilot program in its Philadelphia-area store later this month. If it is successful, Ikea wants to expand the program to other markets. Customers who are part of the retailer’s loyalty program can sell their used Ikea furniture and receive a store credit in exchange. Ikea will resell the items in its “as-is” section of the store, which is home to discounted items. The loyalty program is free and open to all customers.

The amount of store credit consumers will receive for fully assembled furniture will depend on the products’ condition, age, and use case. Some items, including dressers, will not be part of the program.

Ikea already has furniture buyback programs in several other countries including the UK, France, and Canada. This is part of the company’s efforts to be carbon-positive by 2030. Late in 2019, Ikea’s parent company, Inter Ikea Group, announced plans to invest €200 million to meet its carbon-positive goals.

Launching a furniture buyback program in the US will not be without challenges. A big one is how customers will get the furniture to the store. Ikea is not covering the cost to transport the fully assembled items, which could prevent some consumers from participating. It also has to compete with the likes of Craigslist and LetGo, which make it easy to sell used furniture locally.

Ikea faces hurdles on its path to becoming carbon-positive. It will be interesting to see if a furniture buyback program takes off and helps the retailer achieve its goals.

Despite some hopes that it will drive people back into the workforce, signs are emerging that ending the program may have little impact on labor shortages. Economists point to the fact that in the states which already stopped paying the extra $300, people are not returning to work in large numbers. Getting rid of the benefit could slow down growth at a time when the Delta variant is already threatening economic recovery. The expiration of the extra unemployment benefits is projected to result in households losing $4.2 billion in weekly income.

Economists tracking the end of the stepped-up unemployment found that, as of July, only seven of the 25 states that ended the pandemic benefit saw a significant dip in unemployment rates. Meanwhile, recent research from the Federal Reserve Bank of San Francisco found just one in seven workers would decline a job because of the extra $300 a week.

That means unemployment may not be acting as a disincentive to return to work. As a result, ending these programs may not be the spark that solves the labor shortage problem. Rather, the expiration will impact the personal income of households, which could lead to a slowdown in consumer spending. That does not bode well for retailers and consumer-facing companies which have seen sales surge since vaccines rolled out.

The impact of expiring unemployment benefits likely will not begin to show up until the end of September or the middle of October. Some economists expect unemployment claims to continue to decline through the early part of October with the rate of jobless claims returning to pre-pandemic levels in the beginning of next year.

Early 2022 is also when Wall Street watchers expect the Federal Reserve to taper its bond-buying program which has helped prop up the economy. Of course the progress in the labor market is a big factor as to when the Fed will end the program. With the pandemic still raging it will be interesting to see if the economists are right, come the New Year.

"One place to begin when striving to nurture good financial habits is to write out individual money goals. Financial goals can serve as ‘external’ guideposts for kickstarting (and then sticking with) new habits."