Square Inc. (SQ) is acquiring the “buy now, pay later” platform Afterpay (AFTPY) in a $29 billion all-stock deal. A number of fintech companies have been finding ways to scale and diversify in order to compete with large legacy banks.

Square is best known for its white card reader which attaches to tablets and phones, but it also offers a payment service called Cash App. Square sees Afterpay as a useful way to link its seller ecosystems with Cash App. Once the deal is complete, customers will be able to make Afterpay payments through Cash App. Shoppers will also be able to search for stores offering deferred payments through the app.

Services like Afterpay gained popularity during the pandemic, especially among younger shoppers. Afterpay lets consumers make purchases in four interest-free installments. Consumers only pay a fee for Afterpay’s services if they miss a payment. The bulk of Afterpay’s revenue comes from fees that merchants pay to the company.

Many younger shoppers have become wary of credit cards in recent years. The pandemic, which caused financial strain for many, accelerated this trend. Shopping through “buy now, pay later” services gives shoppers a way to purchase high-priced items without credit cards.

Demand for credit cards has been climbing in recent months as the economy reopens, but analysts believe that deferred payments systems will still be popular for years to come.

At the same time as it shared news of the Afterpay acquisition, Square also reported a Q2 net income of $204 million. For context, the company posted losses of $11.5 million during the same quarter a year ago. Square’s recorded revenue was $4.68 billion during this year’s second quarter, compared to $1.92 billion a year ago.

Afterpay has also seen significant growth in recent years. In Australia and New Zealand, more than one in seven adults have an account with the service. It has recently inked deals with a number of retailers in the US including Free People and Anthropologie.

Large banks including JPMorgan Chase (JPM) and Citigroup (C) as well as tech giants like Apple (AAPL) are working to get a piece of the deferred payments market. It will be interesting to see how Afterpay navigates the changing market as it becomes a part of Square.

Join us on August 4th for a discussion featuring Brian Brooks, Chief Executive Officer of Binance.US, to learn why crypto matters, how it works, and how you can get involved.

Plus, Brian will discuss the current regulatory environment and what it means for investors. You’ll have the opportunity to have your burning crypto questions answered live. Claim your spot in the SoFi app! 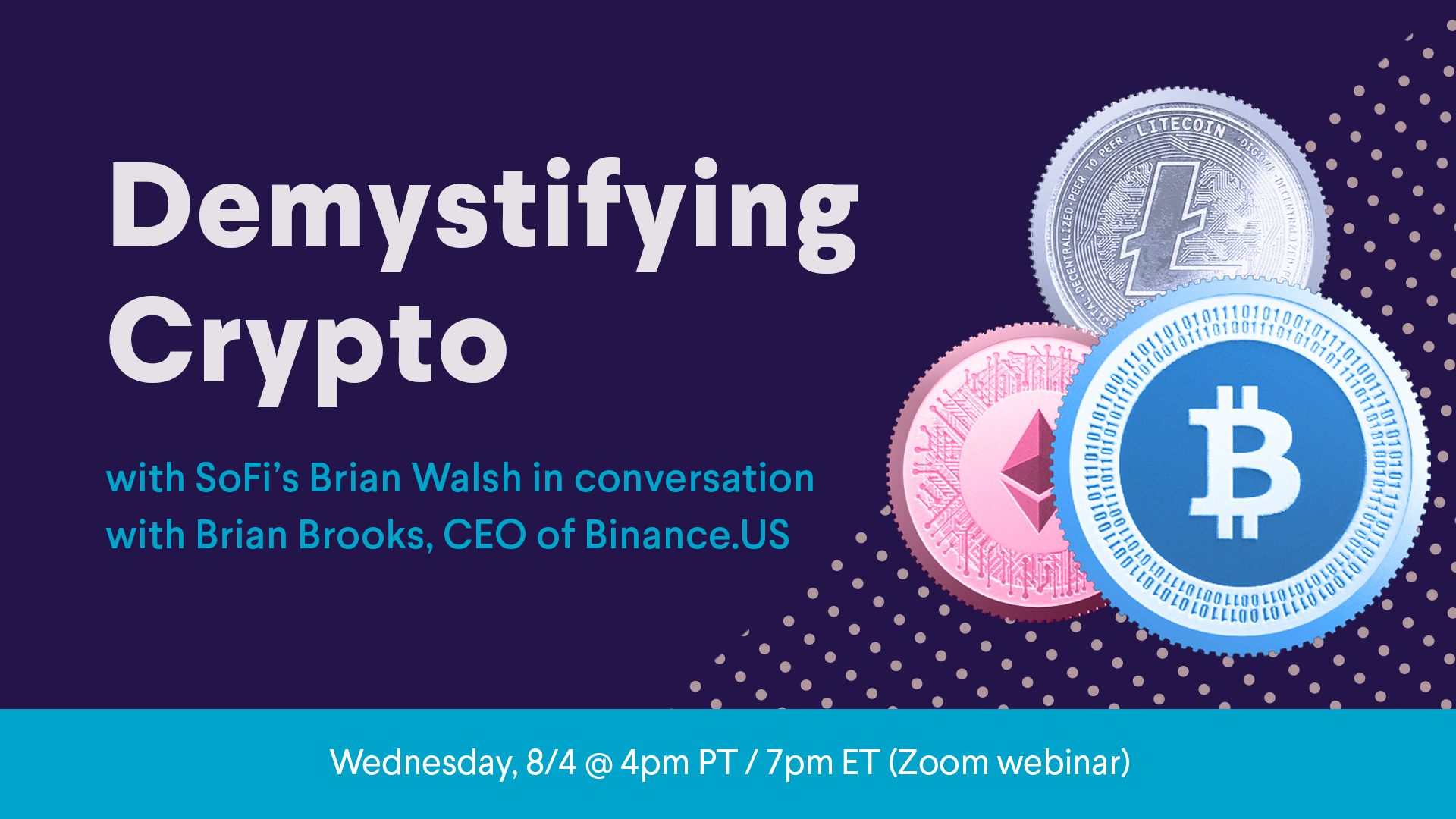 Hello Sunshine, Reese Witherspoon’s media business, is being sold to a Blackstone (BX)-backed firm. The companies did not share terms of the deal, though Hello Sunshine has been valued at about $900 million.

lackstone is purchasing shares from current investors in Hello Sunshine, including AT&T (T) and Emerson Collective. Witherspoon and other Hello Sunshine executives will receive ownership stakes in the new company which Blackstone is creating.

Witherspoon Believes Viewers Need Content by and for Women

In discussing the deal, Witherspoon said, “This is a meaningful move in the world because it really means that women’s stories matter.” The actress and entrepreneur said she plans to continue hiring more female creators and executives as the company moves forward.

Hello Sunshine’s Advantages Over the Competition

Platforms are scrambling for content as competition intensifies in the streaming industry. Just like Hello Sunshine, the new company will be able to license its shows and movies to any platform. This gives Hello Sunshine an advantage over larger studios, like Disney (DIS), which put content out only on their own streaming platforms.

Hello Sunshine also runs Reese’s Book Club, which selects books for members and helps to publicize them. By forming relationships with authors early, Hello Sunshine has an advantage in jockeying for the rights to convert books into shows and movies. Investors will be on the edge of their seats to see what comes next.

What to Know About Rental Assistance

There has been a nationwide eviction moratorium in place for nearly a year, but as of August 1, renters are no longer protected from eviction on a national level. However, people who are having difficulty paying rent can still apply for federal aid. Congress has set aside over $45 billion in rental assistance and only a small fraction of that money has been spent so far.

For those who need help covering rent, it’s a good idea to apply for relief as soon as possible. Renters who are approved for assistance can receive up to 18 months of rent help. Additionally, states including New York, Massachusetts, Nevada, and Oregon have put a moratorium on evictions for people with pending rental assistance applications.

Who Is Eligible for Rental Assistance?

For a household to be eligible for rent assistance, at least one member must qualify for unemployment benefits, or must prove that they have lost income as a result of the pandemic. Applicants must also demonstrate that they are at risk of experiencing homelessness. To do this, people can provide a past-due rent notice or an unpaid utility bill.

Additionally, an applicant’s income must be below 80% of an area’s median income. Some states are giving assistance first to those whose income is below 50% of the medium.

In addition to national assistance, there are also programs from state and local governments to help people cover their rent. For example, a fund in Oklahoma is providing special assistance for renters over the age of 62. Another in California is providing help for Native American renters.

The pandemic has caused financial difficulties for households across the country. Though the national eviction moratorium has been lifted, there are still ways for people to find help with paying rent during a difficult time.

“What your goals are will largely determine whether or not long-term investing is the right choice for you. So you might want to spend time outlining what you want to achieve—which may depend on your life stage—and how much money you’ll need to achieve it.”

Crypto: Bitcoin and other cryptocurrencies aren’t endorsed or guaranteed by any government, are volatile, and involve a high degree of risk. Consumer protection and securities laws don’t regulate cryptocurrencies to the same degree as traditional brokerage and investment products. Research and knowledge are essential prerequisites before engaging with any cryptocurrency. US regulators, including FINRA , the SEC , the CFPB , have issued public advisories concerning digital asset risk. Cryptocurrency purchases should not be made with funds drawn from financial products including student loans, personal loans, mortgage refinancing, savings, retirement funds or traditional investments.

Investing in an Initial Public Offering (IPO) involves substantial risk, including the risk of loss. Further, there are a variety of risk factors to consider when investing in an IPO, including but not limited to, unproven management, significant debt, and lack of operating history. For a comprehensive discussion of these risks please refer to SoFi Securities’ IPO Risk Disclosure Statement. IPOs offered through SoFi Securities are not a recommendation and investors should carefully read the offering prospectus to determine whether an offering is consistent with their investment objectives, risk tolerance, and financial situation.

New offerings generally have high demand and there are a limited number of shares available for distribution to participants. Many customers may not be allocated shares and share allocations may be significantly smaller than the shares requested in the customer’s initial offer (Indication of Interest). For SoFi’s allocation procedures please refer to IPO Allocation Procedures.