Today, New York Federal Reserve President John Williams speaks at a Bank of International Settlements panel. Investors will be looking for any signs suggesting the Fed will do more to tackle rising inflation. Fed policymakers have been sending mixed messages on how long they think inflation will last. Earlier this month the Fed forecast at least two rate hikes in 2023.

On Tuesday, the S&P CoreLogic Case-Shiller home price index for April is released. This data point measures the average value of single-family homes in the US. With inventory for new and existing homes tight, prices have been rising. In March home prices jumped 13.2%. Also Tuesday, the Consumer Confidence Index for June is published.

On Wednesday, the ADP employment report for June is due. This data point tracks private sector employment month over month. Employment in the private sector increased by 978,000 jobs from April to May, marking the largest gain in employment since June 2020. Also Wednesday, pending home sales for May are released.

On Friday, factory orders for May will be released. New orders for goods made in the US fell at a faster rate than expected in April, driven by semiconductor shortages, which hurt production of cars and electronics. With shortages still persisting and pent-up demand surging, all eyes will be on how factory orders did month over month.

Heading into the end of the quarter, it’s a lighter schedule for earnings calls. Nevertheless, here are a few names to keep an eye on this week.

On Wednesday, Constellation Brands (STZ) reports quarterly earnings. With restaurants and bars reopening, investors will be paying close attention to what the spirits company has to say about demand. After all, Constellation Brands is in a good position to provide color given it owns both high-end spirits and beer brands. Last week rival Pernod Ricard (PDRDY) raised its profit target for the year due to a stronger-than-expected recovery since pandemic restrictions have lifted.

Also Wednesday, be on the lookout for Bed Bath & Beyond (BBBY) to report quarterly earnings. The home furnishings retailer is making a big push in the private label market, launching its latest brand last week. Called Wild Sage, the label is targeting young adults and includes bedding, decor, furniture, bath products, and table linen. In March Bed Bath & Beyond said it was launching eight private label brands. Investors will be paying close attention to hear how those efforts are doing.

Micron Technology (MU) rounds out the big names reporting earnings on Wednesday. The memory-chip maker is contending with supply-chain issues and huge demand which is resulting in semiconductor shortages. That is driving up the prices of chips and raising the profits of the chipmakers, including Micron. Wall Street expects Micron to report year-over-year earnings and revenue growth.

On Thursday, Walgreen Boots Alliance (WBA) reports quarterly earnings. In January the drug store and pharmacy operator announced it was selling a majority stake in its healthcare business to AmerisourceBergen (ABC) for $6.5 billion, with about half going to pay down debt and the rest for growth. Investors will be keen to hear if administering COVID-19 vaccine is driving up sales in stores.

Be on the lookout for McCormick & Company (MKC) to report quarterly earnings Thursday. The spices maker was recently added to the Fortune 500 list of largest US companies by revenue and has benefited from pandemic shutdowns that drove demand. With restaurants and cafés reopening, investors will want to see if McCormick’s growth is sustainable.

Tune in for a fearless talk with Rebecca Minkoff, then explore what veterans bring to the workforce. Plus, check out Your Next Dollar—LinkedIn, Twitter, and Zoom live. RSVP in the SoFi app! 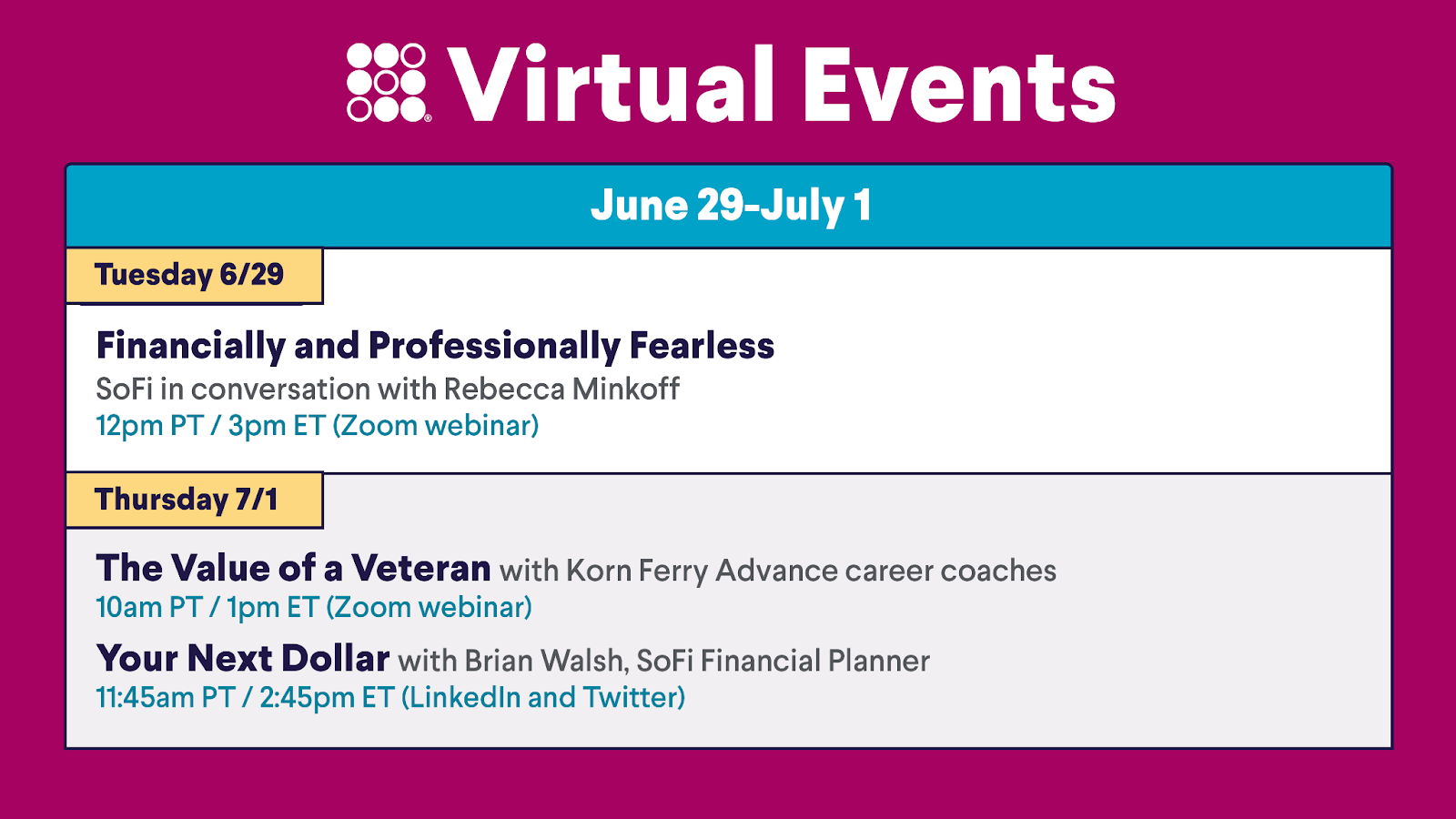 The White House and Senators Reach an Infrastructure Deal

President Joe Biden announced last week that the White House has reached an infrastructure deal with a group of 10 senators from both sides of the aisle. The roughly $1 trillion package includes plans to improve the nation’s roads, bridges, and broadband infrastructure. Lawmakers and the White House will now work to pass the bipartisan plan and a separate Democratic proposal. This will require delicate negotiations in the Senate, which is split 50-50, and the House, which is narrowly controlled by Democrats.

Nuts and Bolts of the Plan

It also includes $65 billion for broadband infrastructure, in order to help close what is known as the “digital divide.” Just $15 billion will be invested in electric vehicle infrastructure and electric buses and transit, which is far lower than what Biden initially proposed.

Republicans and Democrats still need to work out how to pay for the plan. Republicans have said they will not alter their 2017 tax cuts, and President Biden has said he will not increase the gas tax or electric-vehicle user fees.

The two sides are now discussing other options, including ramping up IRS enforcement to make sure that wealthy people are paying the full amount of taxes they owe. Additionally, part of the plan may be funded with unused state and local pandemic relief funds.

Thursday marked an important step for the infrastructure bill, but there is still more work to do. Lawmakers and investors will be carefully monitoring discussions in Washington.

Dealing With Fake and Misleading Reviews

The UK’s antitrust regulator is investigating Amazon (AMZN) and Google (GOOGL) regarding claims that the tech giants do not do enough to deal with fake and misleading reviews on their sites. This adds a new dimension to recent scrutiny of large tech companies.

Inauthentic reviews have been an issue for tech companies for years. Sellers on ecommerce platforms manipulate reviews in a variety of ways. Some go so far as to compensate buyers for giving products positive reviews. This is against the companies’ policies, but they have had difficulty cracking down on these practices.

During the pandemic, consumers became very dependent on ecommerce site reviews. Because they were homebound and could not examine physical products in stores, reading reviews became an essential part of buying decisions for many people. Analysts expect that many consumers will keep up their online shopping habits formed during the pandemic, meaning that trustworthy reviews will continue to be important for people’s daily lives.

Google and Amazon’s review policies have come under scrutiny before. US regulators investigated Amazon’s efforts to remove fake reviews in 2019. Additionally, the UK’s Competition and Markets Authority opened an initial investigation of the problem in 2020. The ecommerce boom has increased the stakes for these investigations.

The tech giants have responded, saying they are taking action to remove reviews which do not accurately reflect customer experiences. Amazon told regulators that last year it caught over 200 million fake reviews before customers saw them. It is also cracking down on social media groups where fake reviews circulate. Google has also shared that it has programs in place to remove untruthful reviews.

As tech giants gained prominence during the pandemic, they also attracted more regulatory scrutiny. The digital commerce industry will be watching closely to see how discussions between UK regulators and Google and Amazon unfold.

“Combat the urge to impulse spend by trying to institute a holding period on all purchases. Before hitting the buy button, wait 24-48 hours. After the holding period, come back to the shopping cart and reevaluate if you really need it. In some cases, you might not even remember why you wanted it in the first place.”

*1000 Rewards points worth $10 when redeemed into Money, Crypto, Active Invest or eligible SoFi lending products; worth $5 when redeemed into a statement credit on SoFi Credit Card. Terms and conditions apply. This offer is non-transferable. To receive the Rewards points offer, you must successfully complete setting up Credit Score Monitoring. Limit one offer per person. SoFi Member Rewards Terms and Conditions apply. SoFi reserves the right to modify or discontinue this offer at any time without notice.