Heading into the end of the quarter, it’s a lighter schedule for earnings calls. Nevertheless, here are a few names to keep an eye on this week…

On Wednesday, Winnebago Industries (WGO) reports quarterly earnings. Heading into its earnings report, the RV maker was downgraded to neutral from buy by Northcoast Research. The Wall Street firm thinks higher prices and extended wait times is leading to less demand and thus slower pre-orders for the company. Add an influx of competitors to the mix and Winnebago’s earnings report should be interesting.

Be on the lookout for a flurry of earnings reports on Thursday, including from drugstore chain operator Rite Aid (RAD). Rite Aid is seeing increased competition in the prescription medicine market, namely from Amazon (AMZN), which is considering opening up its own physical pharmacies. Investors will be paying close attention to what Rite Aid has to say about competition when it reports quarterly earnings.

Also Thursday, Nike (NKE) reports quarterly earnings. The sneaker and apparel company is facing a consumer boycott in China and its shares have been underperforming during the first half of 2021. Still Morgan Stanley just raised its price target on the stock to $185, implying around 40% upside. That has a better shot of happening if Nike paints a bullish picture when it reports earnings.

Be on the lookout for FedEx (FDX) to report quarterly earnings Thursday. The delivery company is looking for ways to reduce costs and just inked a deal with robotics company Nuro to meet that end. Through the partnership, FedEx will test autonomous vehicles in its delivery network. The pilot program is kicking off in Houston. It will be interesting to hear what FedEx says about that deal and other cost cutting initiatives.

On Friday, Carmax (KMX) reports quarterly earnings. One of the nation’s used car retailers is experiencing strong demand despite surges in prices for new and used vehicles. To meet the influx of customers Carmax is aiming to hire 1,800 automotive service professionals by the end of the summer.

LGBTQIA+ individuals, managers, and allies—learn how to navigate coming out at work. Plus, tune in to The Essentials of Crypto—live on LinkedIn, Twitter, and Zoom. Register for these events in the SoFi app! 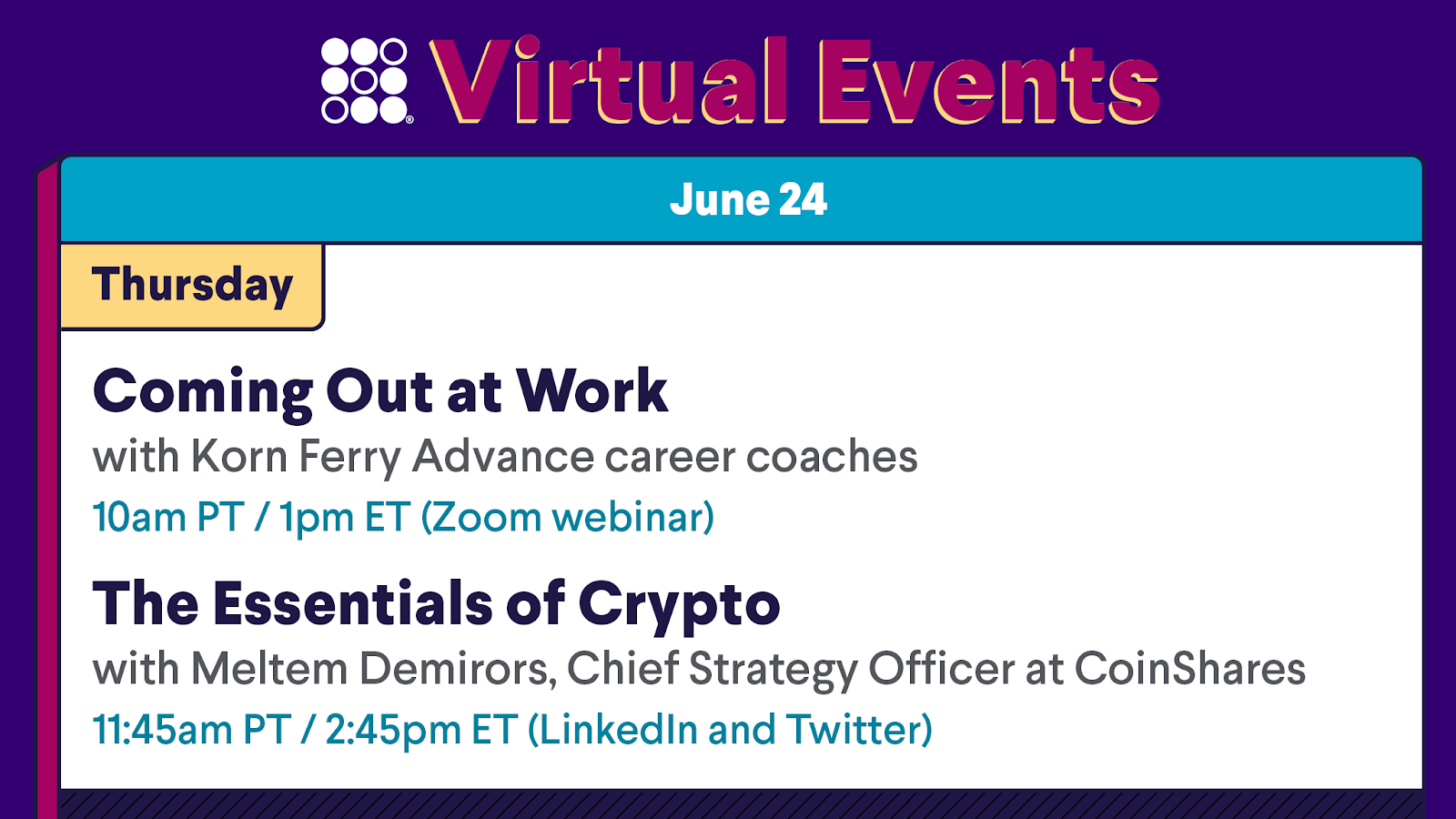 Apple (AAPL) has bold plans to transform healthcare in America, but its efforts have yet to pay off. The tech giant has been working to develop its own primary care medical services, and it also launched a digital health app earlier this year. However, Apple has faced stumbling blocks with both these projects.

A number of large technology companies looking to disrupt new markets and improve efficiencies have set their sites on healthcare. But success has eluded the majority of them. Amazon (AMZN) shut down its Haven unit, an initiative with the goal of reducing healthcare costs. The tech giant partnered with JPMorgan Chase (JPM) and Berkshire Hathaway on the project. Meanwhile, Google (GOOGL) and Microsoft (MSFT) both shuttered their healthcare data-focused operations.

Every year, Apple invests $20 billion in research and development. The tech giant also spends years studying markets before launching products and services. For this reason, its early struggles in the healthcare market are not indicative of its potential for future success. It just may take some time for the company’s ideas to come to fruition.

Apple is betting that the best way to transform healthcare is to link the data its devices generate with virtual and in-person clinics staffed by Apple doctors. To test this idea, Apple took over employee healthcare clinics near its headquarters, offering primary care and continuing health monitoring. The model is still in a preliminary stage, but Apple is hoping to franchise it to health systems one day.

Apple’s HealthHabit app, which connects individuals with clinics and is being tested on employees in California, has struggled to take off since launching six months ago. Half of the employees who downloaded the app as of May have not enrolled. Among those that have, engagement is low.

The healthcare market is huge, complex, and notoriously difficult to crack. Apple’s efforts in the industry have stalled somewhat in their early stages, but they may pay off in the long run.

"Financial health isn’t synonymous with a person’s savings or how much they currently earn. It may be helpful to think of good financial habits as a future-oriented exercise routine that can start with small daily steps—something done today that’s motivated by longer-term gains."