Today, the Institute for Supply Management releases results of the ISM Manufacturing Index for May. The index measures the level of production in the US economy from month to month. In April Manufacturing PMI came in at 60.7%, marking the 11th month in a row of growth. Construction spending for April is also out Tuesday.

On Wednesday, seasonally adjusted, annualized sales of motor vehicles for May are released. The data point measures demand for new vehicles and trucks. April’s sales were a record 18.1 million. Demand for new cars and trucks in the US are currently outstripping supply. The Beige Book is also released Wednesday.

On Thursday, initial and continuing jobless claims for the previous week are released. With vaccinations widely available and pandemic restrictions easing, initial unemployment numbers have been steadily declining.

On Friday, the Labor Department releases nonfarm payroll numbers for May. This data point tracks the number of workers in the US excluding farm, government, proprietors, and nonprofit workers. In April the number grew by just 266,000, which was much lower than economists had expected. Factory orders are also due Friday.

Today, Zoom (ZM) reports quarterly earnings. Discussions about Zoom fatigue have been prominent recently. Both HSBC (HSBC) and Citi (C) have instituted Zoom-free days where employees aren’t required to be on video calls. TikTok and Salesforce (CRM) have also put limits on video calls. As the economy reopens and some people begin to return to offices, it will be interesting to see what role Zoom plays in the post-pandemic workplace.

Be on the lookout for quarterly earnings from PVH (PVH) on Wednesday. The US clothing company which owns Van Heusen, Tommy Hilfiger, and Calvin Klein, saw revenue fall 28% for 2020 as extended lockdowns hurt sales. Investors will be eager to learn whether PVH has benefited from stimulus checks and reopening trends.

On Thursday, Lululemon Athletica (LULU) reports quarterly earnings. The fitness apparel company is testing a new website which lets shoppers buy and sell used Lululemon clothing. This is one of several green initiatives the company has started. It has also launched a new line with lower-impact dyes which use less water, carbon, and synthetic chemicals. It will be interesting to see whether Lululemon’s sustainability efforts are resonating with customers.

Also Thursday, Slack Technologies (WORK) reports quarterly earnings. The workplace communication company being acquired by Salesforce (CRM) is facing intense competition from Google (GOOGL) and Microsoft (MSFT). Earlier this month Slack purchased Woven, the popular calendar app, to give it an edge over its rivals.

Get tips on executing a job strategy that gets results and helps you chart your progress. Plus, tune in to Your Next Dollar—live on LinkedIn, Twitter, and Zoom. RSVP in the SoFi app! 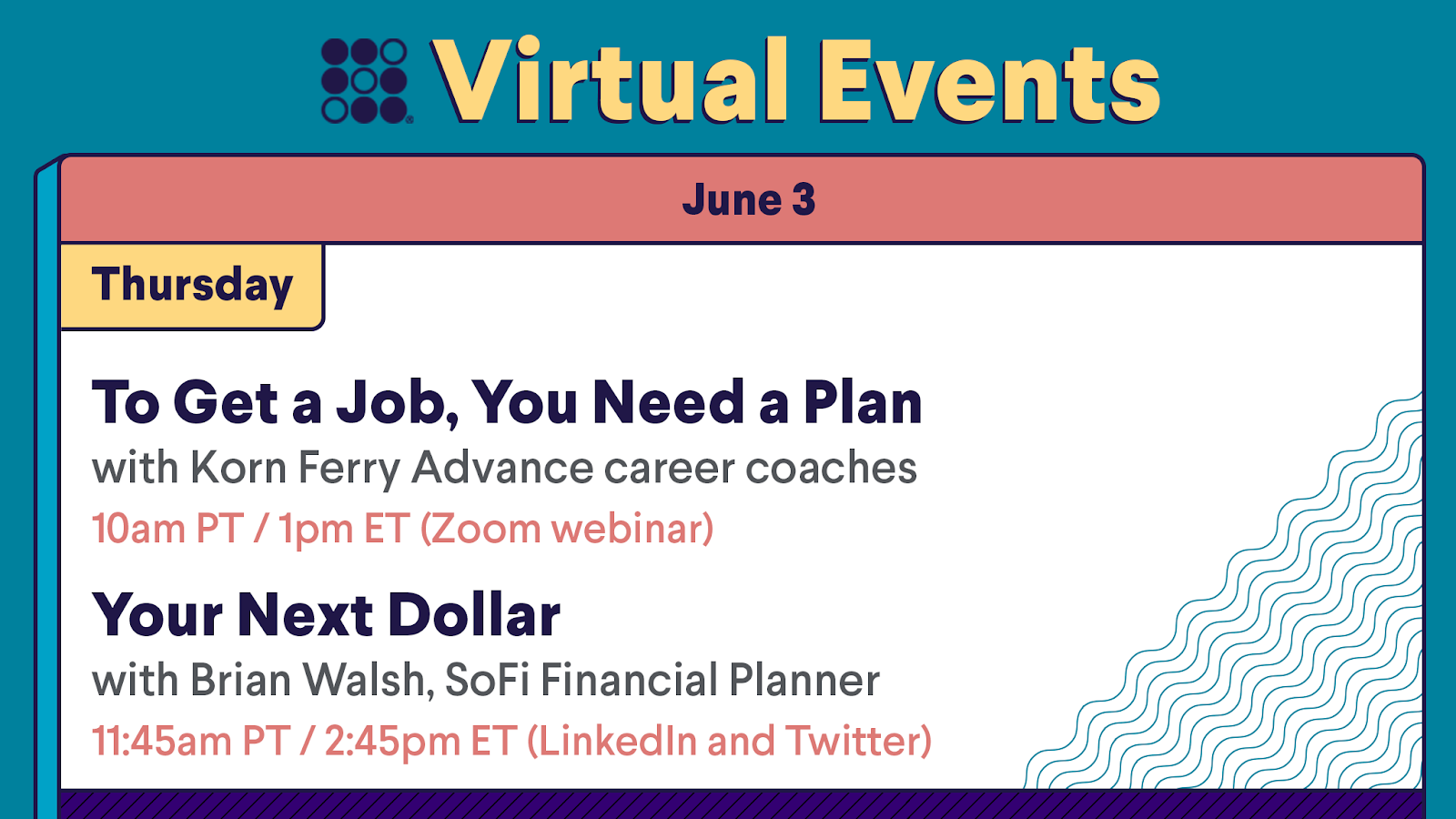 How to Commingle Finances After a Wedding

Money Issues Don’t Have to Cause Strife

After 2020 forced so many couples to postpone their weddings, many will finally get to say I do this summer. This means these newlyweds will also be commingling their finances.

Talking about money in a relationship can be difficult. After all, money issues can cause fights and are often cited as a reason couples break up. The good news is that it doesn’t have to be that way. There are several strategies newlyweds can deploy to merge their finances and maintain marital bliss. Every couple is different, but here are a few strategies which could be helpful.

One method adopted by many newlyweds is to keep their finances completely separate. Each partner maintains their own bank account and contributes income each month for shared expenses such as a mortgage payment, subscription services, or shared groceries. This method enables both individuals to maintain financial independence. It could also make it less complicated if each partner is working toward their own financial goals like retirement or investing.

Keeping finances separate could get complicated if one person earns more than the other. This method also does not work well in single-income households. Another similar strategy could be for a couple to maintain a joint bank account for shared expenses while each having their own bank accounts to cover personal expenses.

For Love and Money

For couples who want to join everything including their finances, there is the all-in method. With this approach, the couple maintains a joint bank account and shares all expenses. This strategy enables complete transparency when it comes to transactions. It may work well in single-income households and when one spouse makes more than the other. However, that is not to say this strategy will help couples avoid all conflict. If partners have different approaches to financial decisions, both large and small, this could cause strife.

This method also makes it difficult for people to pursue individual financial goals. As with all decisions in a relationship, it’s a good idea for couples to have honest and open conversations about how they plan to handle their finances both before and after tying the knot.

With Credit Cards Paid Off, Consumers Look for Next Options

Consumers Paid Down Record Credit Card Debt During the Pandemic

Thanks to student loan and mortgage forbearance plus pandemic stimulus checks, consumers were able to pay down $82.9 billion in credit card debt last year. Another $49 billion came off the nation’s credit card bills in the first quarter of 2021. This marked the second-largest quarter-over-quarter decline in credit card debt since 1999.

Now many individuals are left wondering what debt to pay down next.

The words “snowball” and “avalanche” might sound like an alarming day on the mountain, but they also apply to two popular debt payoff methods.

The Snowball Method entails paying off debts in order from smallest to largest–regardless of their respective interest rates. Those using this method continue to make at least the minimum payment on all of the debt owed, but pay as much extra as possible toward the smallest debt on the list. Once the smallest debt is paid off, you move the focus to the next smallest, and so forth.

High-interest rate debt is not only expensive, it can also take forever to pay off. But just because your loan or credit card came with a high rate doesn’t necessarily mean you’re stuck with it forever. Consolidating debts with a personal loan at a lower interest rate or with a shorter term offers another option to pay those debts off in less time than expected.

Depending on the lender, some personal loans come with origination fees, late fees, or prepayment penalties, which could potentially drive up the cost of your loan. When shopping around for debt payoff solutions, keep an eye out for any fees that a lender could apply to a personal loan.

Debt reduction strategies are as unique as the individuals paying them. The good news is there are many options to choose from.

"The first step to tackling high interest debt is understanding your overall debt load. List out all debt including balance, payment, and interest rate. Any debt with an interest rate greater than 7% is considered high, so separate those out and develop a plan to pay them down."