Vehicle sales for April are due today, which gives investors a glimpse into how the economy is performing. Auto sales in April are expected to set records in spite of a global semiconductor shortage which is hurting production. Also today, construction spending for March is released.

US factory orders for March are published tomorrow, which tracks new orders for goods. Orders fell 0.8% in February due in part to unseasonably cold weather. The metric is expected to show an improvement in March thanks to pandemic stimulus checks. Data on the trade deficit is also released Tuesday.

On Wednesday, The Institute for Supply Management releases the ISM Services Index number, which measures activity in the services industry. In March the services index was 63.7%—higher than the 55.3% reading in February. The hospitality industry is reopening as more people receive COVID-19 vaccines, which is driving growth. More of the same is expected for April. Also on Wednesday the final services PMI and ADP employment figures for April are due.

On Thursday the US Labor Department will release continuing jobless claims and initial jobless claims for the previous week. Last week first-time claims fell to 553,000—a new low since the pandemic began. It marks the third straight week with jobless claims under 600,000. Also on Thursday, productivity and unit labor costs for the first quarter are released.

Lastly, on Friday the Bureau of Labor Statistics releases nonfarm payrolls for April. Nonfarm payrolls rose to 916,000 in March, blowing past economist estimates. Along with the jobs report, April’s unemployment rate will be released. Wholesale inventories and consumer credit numbers for March are also published.

Pfizer (PFE) reports its latest results tomorrow. The drugmaker is busy selling its COVID-19 vaccination, which has now been administered to hundreds of millions of people. The drug company and the European Commission are close to finalizing a deal for the EC to purchase 1.8 billion doses of the Pfizer and BioNTech (BNTX) coronavirus vaccine.

On Wednesday, look for Uber Technologies (UBER) to report quarterly earnings. The ride-hailing division of the company took a hit during the pandemic but business is beginning to improve as more people receive COVID-19 vaccines. Uber and rival Lyft (LYFT) have regained more than half of the business they lost during the pandemic. With the Biden Administration signaling it supports classifying gig workers as employees, investors will want to hear what Uber has to say.

Moderna (MRNA) reports quarterly earnings on Thursday. The drug company recently inked a deal with Israel to supply the country with its COVID-19 vaccine in 2022. Investors will be paying close attention to see if other countries will place their own vaccination orders for next year.

On Friday, Draftkings (DKNG) reports quarterly results. The online sports betting company has emerged as a leader in the internet gambling sector which one analyst believes is a $35 billion market. Earlier in April New York legalized betting, joining 11 other states.

It’s SoFi de Mayo! Celebrate Cinco de Mayo with two festive salsa-centric events, plus learn how to negotiate like a pro—live on LinkedIn, Twitter, and Zoom. Register in the SoFi app to reserve your seat! 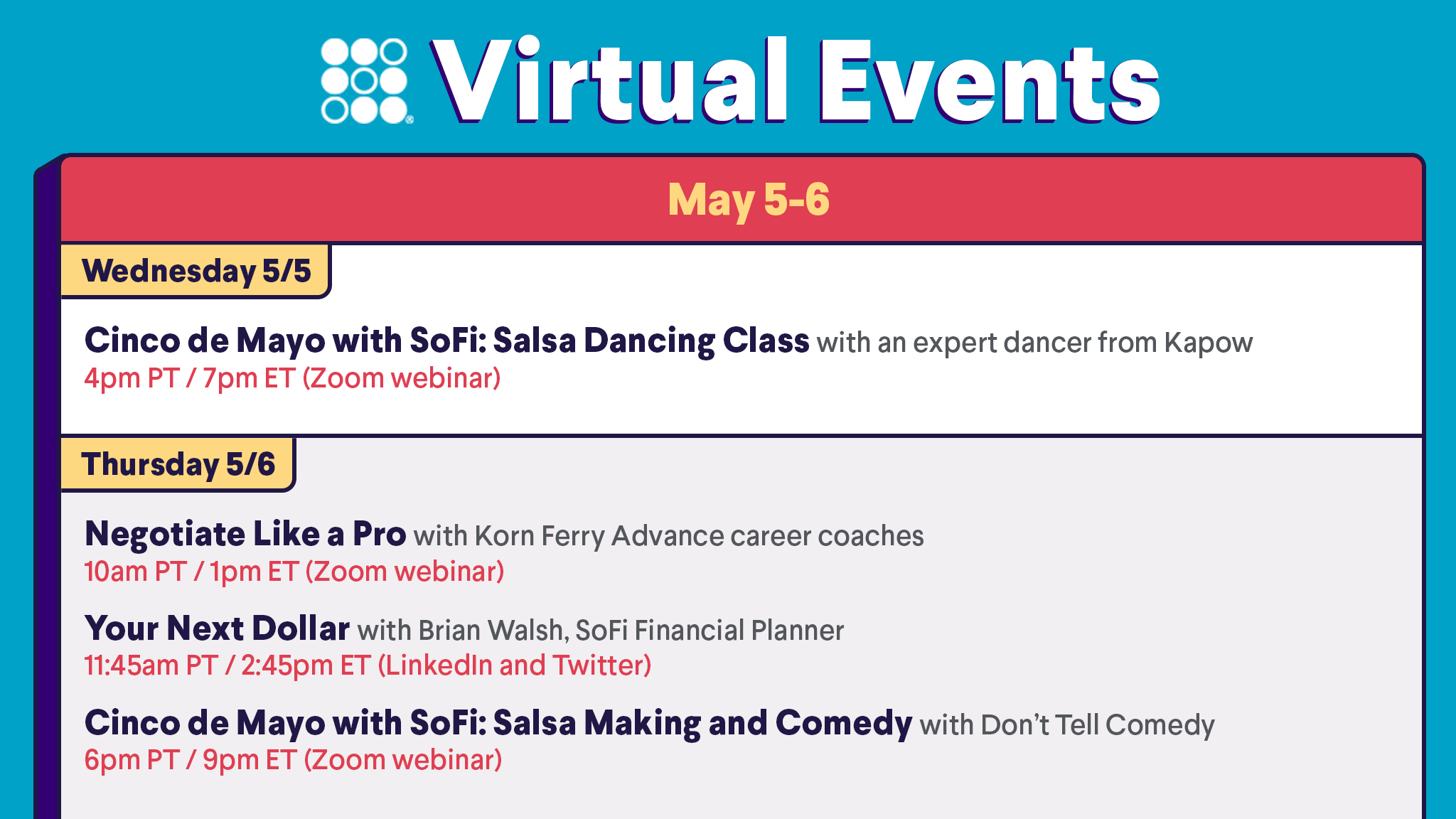 Citing economic uncertainty, several large banks stopped originating new HELOCs at the onset of the pandemic. Those same banks are still sticking to these policies, even as the economy and the labor market improve. Additionally, the real estate market is booming and there is $7.3 trillion in home equity which homeowners have not tapped.

Wells Fargo, (WFC) which suspended new HELOCs last April, doesn’t know when it will lift the rule. JPMorgan Chase (JPM) also has not said when it will begin accepting applications for new home equity lines of credit again.

Bank of America Bucks the Trend

Bank of America (BAC) is among the handful of large financial institutions which continued to extend home equity lines of credit during the pandemic. The bank instituted more stringent underwriting standards to protect against the increased risk of default and only worked with existing clients. As the economy began to improve in the first quarter, Bank of America relaxed those standards. It is now seeing pent-up demand for HELOCs.

The other big banks are expected to restart HELOC originations, but only in instances when the bank holds the first mortgage on the property. This way, if a customer defaults there is less risk of loss to the bank.

Are HELOCs Worth it for Banks?

It is not completely clear why banks have been reluctant to reenter the HELOC market. Initially, banks were trying to protect themselves against defaulting homeowners. Now, it may be an operational issue.

During the pandemic, big banks saw huge demand for mortgage refinances as rates dropped below 3%. As a result, staff members who used to work on home-equity lines of credit started working on mortgage refinances to meet the surging demand. Capital reserve and liquidity requirements associated with HELOCs are also prompting banks to focus on other lending products.

As the economy continues to rebound, analysts in the home-focused debt space will be watching to see what long term impact the pandemic had on these special lines of credit.

On Friday the European Commission said that Apple’s (AAPL) methods of distributing music streaming apps through its App Store are anticompetitive. The EU’s Competition Head Margrethe Vestager said preliminary findings support allegations that Apple uses its market power to force music streaming services to distribute their apps only through the App Store.

The European Union opened an inquiry into Apple’s App Store practices in 2019 after Spotify (SPOT) and other app developers complained about Apple’s licensing agreements. Apple gets a 30% commission on all subscription fees which come from the App Store. The developers also say Apple makes it impossible for them to alert customers about alternative ways to purchase the apps.

Two Sides of the Story

Apple has called the EU’s inquiry the “opposite of fair competition.” The iPhone maker noted Spotify is the biggest music subscription service in the world, partly because of its distribution through the App Store. “Once again, they want all the benefits of the App Store but don’t think they should have to pay anything for that,” Apple said.

Meanwhile, during a recent press conference, Vestager highlighted the importance of app stores to the digital economy and discussed the downsides of Apple holding as much power as it does. “This significant market power cannot go unchecked as the conditions of access to the Apple App Store are key for the success of app developers,” Vestager said.

Spotify is not the only app developer to file complaints against Apple’s App Store practices with the EU. Kobo, the ebook subsidiary of Japan’s Rakuten (RKUNY), filed an antitrust complaint with the EU in March, while Tile, which makes Bluetooth tracking devices and apps, filed a complaint in May. Meanwhile, Epic Games, which is locked in a legal battle with Apple in the US, also lodged a formal complaint with the European Commission.

Apple’s fight with the European Commission is just beginning. As rivals circle, it will be interesting to see who comes out ahead in this tech battle.

“If you’re trying to set a budget for your home addition, you can start by first obtaining bids from three professionals, then adding in 15-20% to the overall project price given by the contractor to cover unforeseen costs.”