Today, January wholesale inventories will be released. This metric measures the change in the total value of goods wholesalers have in their inventories. The metric was $651.5 billion in December—a slight increase from November.

Tomorrow, the NFIB Small-Business Index for February will be published. This metric measures the health of small businesses in the US. It declined slightly between December and January, in part because of slower-than-expected vaccine rollout.

On Wednesday, look for the February federal budget, February Core CPI, and the February Consumer Price Index. This metric tracks the average prices of consumer goods and services like transportation, food, and medical care. In January, it increased by 0.3%.

On Friday, the March preliminary University of Michigan Consumer Sentiment Index will be released along with the February Producer Price Index. This metric was up 1.3% in January.

Today, Stitch Fix Inc (SFIX) will report earnings. The online personal styling service has gained new customers during the pandemic as people have been looking for a way to replace the guidance that in-person shopping can provide. However, the company has also seen its marketing and shipping costs rise recently.

Tomorrow, Dick’s Sporting Goods (DKS) hands in its report card. The retailer has seen its sales surge during the pandemic as people have stocked up on at-home workout gear. Dick’s has also invested in ecommerce operations over the past year, but it plans to open three new brick-and-mortar stores this month, showing that it’s making plans for when consumers return to some pre-pandemic shopping habits.

On Wednesday, look out for an earnings report from Bumble (BMBL). This will be the dating app’s first report as a public company. Bumble had a blockbuster IPO last month, trading up nearly 77% on its first day. The stock has stayed strong since then.

On Thursday, DocuSign (DOCU), the electronic signature platform, will report earnings. Like many remote work companies, DocuSign has seen demand for its services surge during the pandemic. The company’s share price climbed 192% between April 1, 2020 and September 1, 2020. DocuSign’s leadership is now thinking about how to retain new customers even after workers return to offices.

GoodRx (GDRX) will also share its latest results on Thursday. The company is best known for its app which allows people to compare prescription drug prices, but it has recently expanded to begin offering telehealth services. GoodRx went public in September 2020 amidst a boom for the telehealth industry.

From a Self Defense Workout to Resume Do’s and Don’ts, there’s a free virtual event for everyone. Join us live to experience them all. Reserve your seat in the SoFi app! 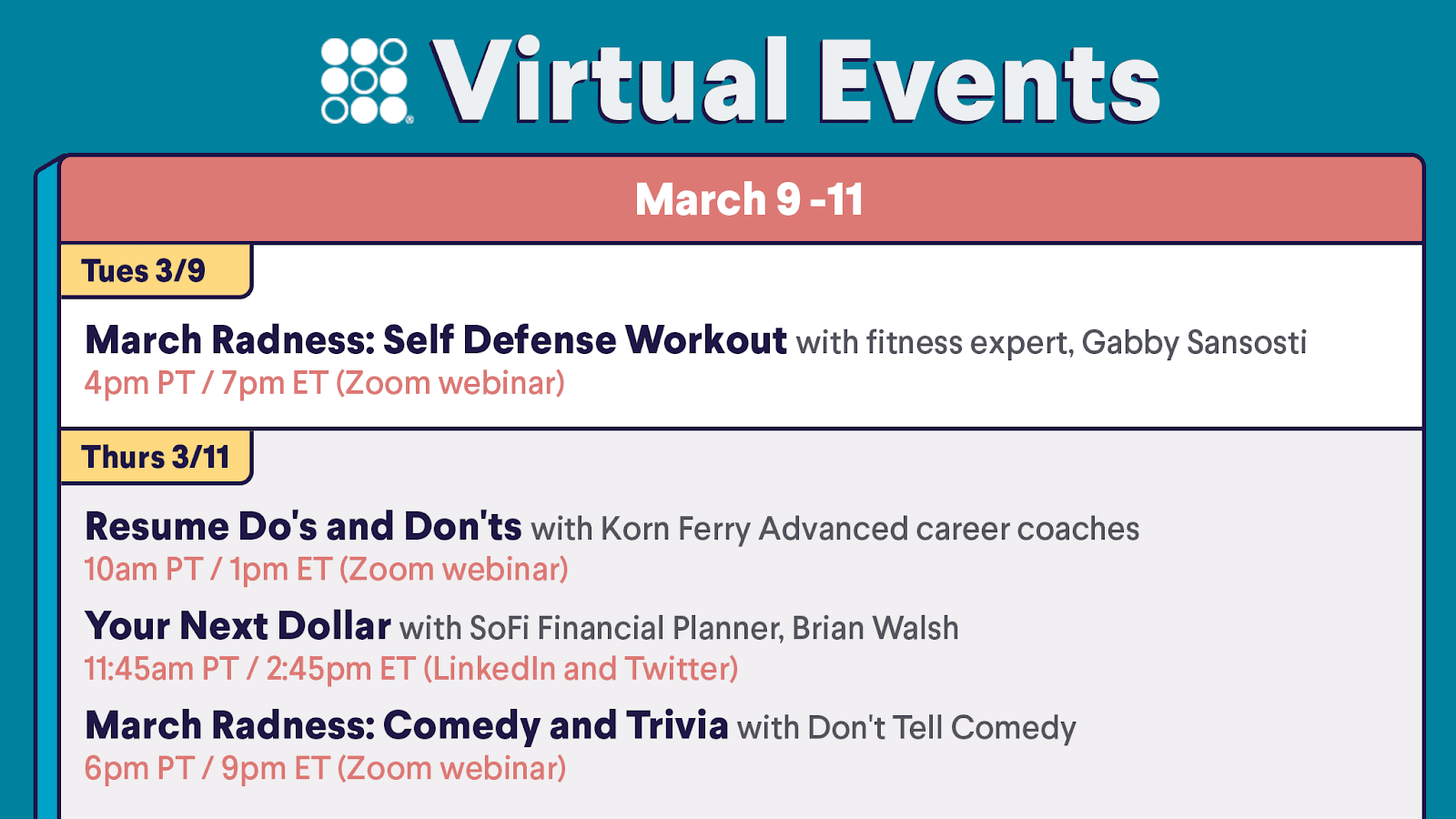 Comparing the House’s Version to the Senate’s

Over the weekend, the Senate passed President Joe Biden's $1.9 trillion coronavirus relief package. The upper chamber approved its version of the bill along party lines with 50 Democrats supporting the American Rescue Plan, as it's known, and 49 Republicans voting against it. The Senate's iteration of the legislation contains more narrow measures than the version passed by the House of Representatives two weekends ago. Here are some key differences:

The House bill attempted to raise the federal minimum wage over the next five years from $7.25 per hour, where it stands currently, to $15 per hour by 2025. The Senate bill does not address the topic of increasing the minimum wage because in February the Senate parliamentarian ruled wage increases could not be included in this type of bill.

Some Other Measures Included in the Bill

A few other measures from the bill include:

The House passed its version of the relief bill at the end of February, but because of the changes in the Senate’s version, the bill will now go back to the House. The House is scheduled to vote on the amended legislation tomorrow.

If the bill is approved by the House, it will then go to President Biden’s desk to be signed into law. Senate majority leader Chuck Schumer expressed confidence that the House would pass the Senate version of the bill.

Investors and Collectors Are Spending Millions on NFTs

What Is an NFT?

People are spending millions of dollars on digital collectors items, known as NFTs or non-fungible tokens. NFTs can take a variety of forms, from digital trading cards to digital art.

NFT ownership is recorded on a blockchain, a digital ledger similar to the networks that Bitcoin and other cryptocurrencies use. But in contrast to most cryptocurrencies, each NFT is unique. People cannot exchange one NFT for another the way they could with bitcoins or traditional currencies.

Interest in NFTs Across Industries

A variety of industries are capitalizing on the NFT boom. The NBA has licensed short clips showing highlights from players to a startup called Dapper Labs. The company digitizes the footage and creates scarcity. Basketball fans and investors can then buy and sell the clips on a platform called NBA Top Shot.

Art auction house Christie’s is in the process of running an auction for a virtual art piece by the artist, Beeple. The sale has not yet closed, but the piece has already been bid up to $3 million. Two weeks ago, a piece of video clip art by Beeple sold for $6.6 million.

Skeptics and Supporters of NFTs

The value of NFT transactions quadrupled last year, hitting $250 million. During the pandemic, many have had extra time and extra cash on their hands, so they have sought new ways to invest.

Some are excited about the NFT boom, saying that it is finally providing a way for artists to be paid fairly for their online creations. If NFTs gain traction, it could potentially solve problems created by the fact that the internet allows people to listen to songs and view images and videos for free, with little or no compensation going to artists.

In contrast, NFT skeptics are concerned that investments in these digital collectibles are too speculative and the bubble is bound to pop. In the coming months, people across a variety of industries will be eager to see how the NFT boom unfolds.

“One strategy to approaching home additions is to create your dream list, then have alternate choices in mind if your budget, material availability, or other external factors create a need to alter the project down the road. For example, you may love the look of marble flooring, but its price point might be higher than you’d initially estimated—or perhaps it doesn’t blend in with the rest of your house once you’ve started laying out the plans. Having a back-up plan—and one that’s cost-efficient at that—could help keep your budget in check.”