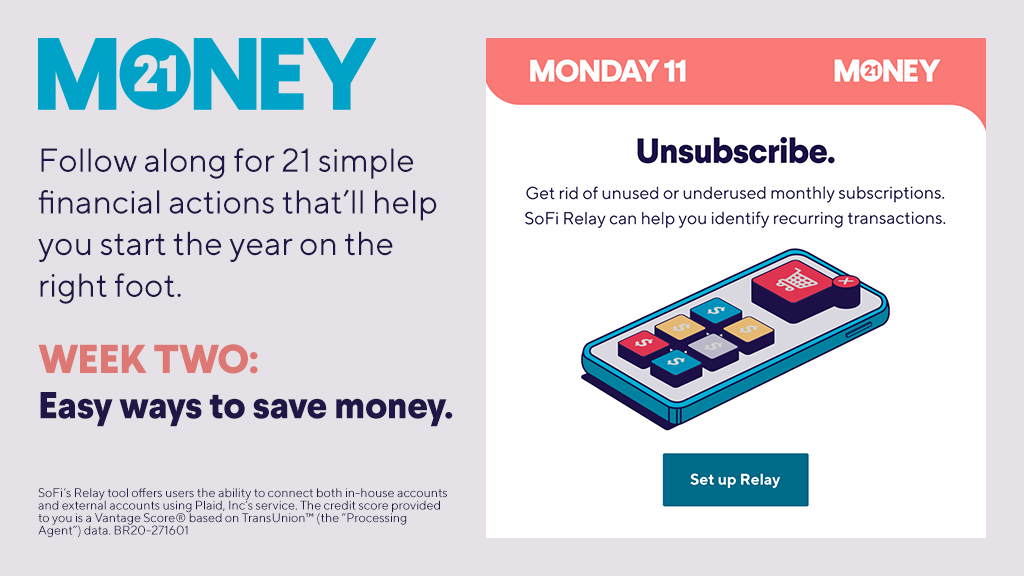 As part of Congress’s latest coronavirus stimulus package, the Paycheck Protection Program (PPP) was relaunched with an additional $284 billion for loans to small businesses. Select small business owners can now apply for this funding.

Lantern by SoFi provides a marketplace where eligible small businesses can match to one of dozens of qualified lenders based on lender capacity and program eligibility. Through Lantern by SoFi’s single application process, business owners and operators have access to an easy way to compare offers across a set of financial solutions, including those that are part of the SBA Paycheck Protection Loan Program (PPP).

Feel free to share this information with a small business owner you know who could use the help during this uncertain time.

No economic data is scheduled to be released today.

The December consumer price index, December core CPI, December Federal Budget, and Beige Book will be released on Wednesday. The consumer price index, also known as the CPI, measures the weighted average of prices for consumer goods and services. Transportation, medical care, and food are all included in the CPI. Economists use CPI to track shifts in cost of living. It can also be used to track periods of inflation or deflation.

Initial jobless claims will be released on Thursday. First-time filings totaled 787,000 for the week ending January 2, which was below economist expectations of 815,000. Claims remain well above pre-pandemic levels.

With the first trading week of the new year in the history books, a few well-known firms will begin to report their latest quarterly results. Most of the focus will be on how asset managers and banks performed over the past three months with a string of reports toward the end of the week.

Tomorrow Albertsons Companies Inc (ACI) will report earnings. The company made headlines last week when it announced a “strategic decision” to shift away from its in-house fleet of grocery deliverers and transition to a third-party delivery app. Albertsons has been criticized by employees for halting pandemic pay raises and increasing healthcare costs.

On Thursday Blackrock (BLK) will report earnings. Wall Street expects BlackRock to continue organic growth. The world's largest asset manager has $7 trillion under management and is leading the way in the ESG space, or Environmental, Social, and Corporate Governance. Over the past year, nearly 80% of institutional investors said they will halt investing in firms that aren't considered sustainable. Blackrock has been at the forefront of this trend.

On Friday JPMorgan Chase (JPM) and Citigroup (C) will report earnings. Wall Street expects JPMorgan to announce lower revenue but increased profitability in 2021, which could be the case for many large banks. For its part, Citigroup appears to be investing heavily in modernization and digitization. The bank has also started a $1 billion initiative aimed at closing “the racial wealth gap and [increasing] economic mobility.”

It’s a new year and you probably have new questions about your finances and career. Bring them all to this week's events. Reserve your seat today in the SoFi app, and catch up on past events on our YouTube channel. 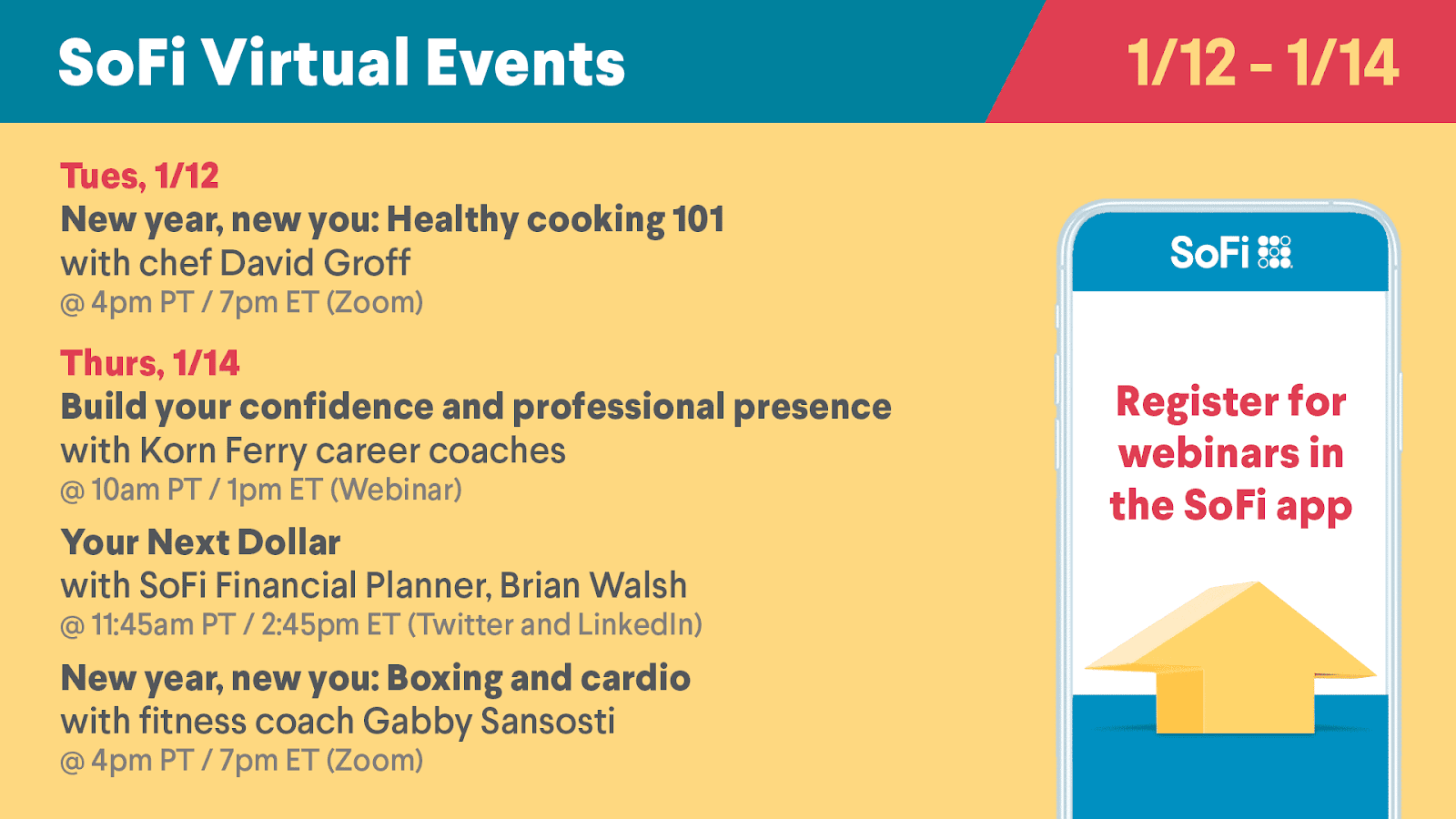 Late last week Hyundai (HYMTF) released a statement disclosing it was in talks with Apple (AAPL) about the development of an autonomous car. The announcement led to an $8 billion spike in Hyundai’s market value, making an estimated $2 billion for the family behind the Korean auto company. The statement was first reported on Korea Economic Daily’s cable TV unit, and noted that Hyundai was waiting on approval from the company’s chairman to begin the project with Apple.

After the report was televised, Hyundai released a statement saying it was one of a variety of carmakers Apple was considering for the partnership. Thirty minutes later, Hyundai revised the statement and removed the reference to other auto companies. Just hours after that revision, Hyundai also removed Apple from the statement, which then in the end read: “We’ve been receiving requests for potential cooperation from various companies regarding development of autonomous EVs. No decisions have been made as discussions are in early stage.”

The initial news about potentially partnering with Apple gave Hyundai its biggest stock jump since 1988. But it could also endanger the future of the auto company’s partnership with Apple, a notoriously secretive company.

In 2012 Apple CEO Tim Cook said he would work to make sure Apple’s autonomous transportation projects remained a secret. In 2018, the company warned its employees against leaking internal communications on future projects. Apple said it had “caught 29 leakers” and threatened legal action and criminal charges against employees who released information. Apple did not comment publicly on the Hyundai report.

Why Apple Needs a Partner

Tech giants like Alphabet (GOOGL) and Amazon (AMZN) have formed partnerships with automakers for their autonomous vehicle projects, so it makes sense that Apple would also look for a partner in the development of its own car. While Apple is an established tech company, building its own car plant and producing vehicles could cost the company billions of dollars and take several years to establish. A partnership would help Apple develop a sales network and production system.

Strategists also suspect that Apple would be more interested in developing software, chips, and sensors for autonomous vehicles than in actually bending the metal of a car body, which is a business with a much smaller profit margin. Apple may even abandon an “Apple Car” concept in favor of developing an autonomous vehicle system for a third-party carmaker. The future is uncertain, but if the Hyundai deal does go through the company could be a natural fit, as it is already working on electric, self-driving, and flying cars.

In the year ending September 30, more than 50,000 new homes were built in the United States...for use as rentals. Those houses are part of a trend toward building-to-rent, as Americans search for more space and landlords seek more income. Historically, just 1% of new homes are built and then sold directly to investors, but those in the industry expect that average to exceed 5% over the next few years.

Homeownership Unaffordable for Many

As US residents looked for more space during coronavirus lockdowns in 2020, home prices also rose to record highs. Those home prices have surpassed earnings growth, so even though low interest rates have made borrowing exceptionally cheap, homeownership is unattainable for many. Homeownership is now unaffordable for the average worker in more than half of US counties. That is up from 2019, when homeownership was unaffordable for 43% of that population.

Still, Americans in the midst of a pandemic are in search of homes where they can safely live, work, and spread out a little bit. Landlords of single-family homes say they have experienced record occupancy since the pandemic’s start, and rents for single-family homes have ballooned.

Building new homes to rent boomed as a concept a few years ago, when landlords who purchased huge swaths of property during the housing crisis started looking for new properties to acquire. After the housing crisis, banks and lenders stopped financing purchases by people in the lower-middle class, and that made builders stop developing smaller, entry-level houses. So mega-landlords started building their own rental homes.

Investors realized they could charge premiums for renting brand new homes, and they could put their preferred finishes on the houses from the start. Building to rent also increases developers’ flexibility and allows for more favorable financing. With this low risk and high demand, investors will likely continue betting on suburban rentals for the next few years, at least.

"One survey found that Americans underestimate their spending on subscription services by a whopping 84%. Putting all your monthly subscriptions on one card can simplify the way you keep track of your spending."