Today look out for the November Empire State Index, an economic indicator that comes from a monthly survey of manufacturers in the state of New York. Respondents shared in October that business activity expanded slightly, though growth was slower than in September.

On Wednesday look for October building permits and October housing starts, meaning the number of new residential construction projects that began during the month. In September housing starts were up 1.9%, and permits for future homebuilding rose 5.2%.

On Thursday the October Index of Leading Economic Indicators, October existing home sales, and initial jobless claims will be released. Last week, initial jobless claims hit 709,000, below 757,000 the week prior. This is the fourth consecutive week that the total has fallen, though it is still above the pre-pandemic record of 695,000, set in 1982.

There are no economic reports scheduled for Friday

Today, SmileDirectClub (SDC), the Nashville-based company that provides remote teeth straightening services, reports earnings. For customers who would rather not visit an orthodontist in person because of the pandemic, SmileDirectClub has been a useful alternative. The company’s services are also generally cheaper than a traditional orthodontist. Both these factors have given teledentistry brands a boost during the pandemic. For example, Align Technology (ALIGN), a SmileDirect competitor, recently reported a 21% rise in revenue for its most recent quarter.

Tomorrow Home Depot (HD) hands in its report card. Home improvement stores like Lowe’s (LOW), Menards, and Home Depot have seen their sales surge during the pandemic. Consumers have been spending more time at home and working on DIY projects to entertain themselves. Analysts expect that these companies could see record sales this holiday season.

On Wednesday look for a report from Target (TGT). The retailer has made significant adaptations to its stores to help customers shop safely. It offers same-day delivery, contactless pickup, and other options. The company’s sales of kitchenware, home decor products, and video games have been particularly strong recently as consumers continue to spend time at home.

On Thursday Macy’s (M) reports earnings. Macy’s had been struggling to keep up with the shift to online shopping even before the pandemic, and now that trend has been accelerated. However, the retailer secured $4.5 billion in financing over the summer, which will help it stay in business for some time even if the chain sees weak demand this holiday shopping season.

To round out the week, Foot Locker (FL) will report earnings on Friday. The chain operates 3,100 retail stores in 27 countries. Though the company has struggled with store closures, sales of athletic shoes and clothing surged over the summer and early fall as consumers looked for COVID-safe ways to stay in shape, like running.

Knock, knock—this week’s virtual events are here. From industry insights to entrepreneurship during COVID, there’s something for everyone. Watch on Zoom, Twitter, LinkedIn, and Instagram. Register in the SoFi app! 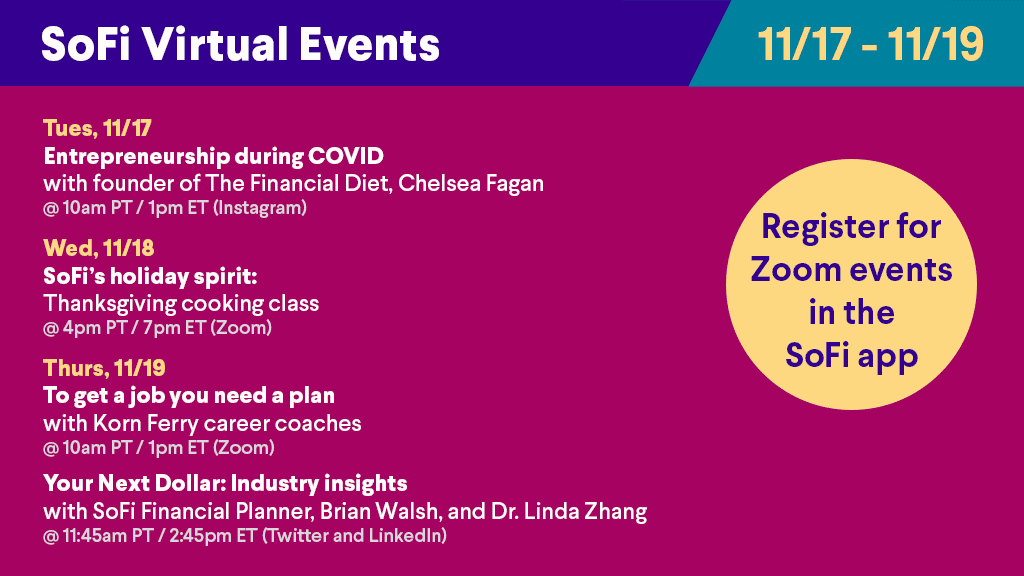 The New Frontier of Ecommerce Advertising

Even before the pandemic, large retailers were working to incorporate advertising into their online shopping sites. Now, as millions of customers have shifted to shopping online, those plans are being accelerated.

Target’s (TGT) online sales almost tripled during its most recent quarter. Kroger’s (KR) online sales surged 127% and Walmart’s (WMT) climbed by 97%. During the most recent quarter, COVID-19 restrictions were loosened across much of the country. The fact that online shopping remained so popular shows that these changes could be permanent. Especially during the early days of the pandemic, retailers struggled with the high cost of delivering groceries and making operational changes to meet customers’ needs. Now, they are seeing several ways to leverage their online sites to increase profits.

Keeping Up With Amazon

Companies are selling advertising space on their websites to suppliers, much like they would sell advertisements in a newspaper. These ads feature coupons or links to more information about brands. Retailers also have the ability to gather precise data about shoppers’ habits on their sites. This data makes it very easy for brands to track the efficacy of their advertising dollars on stores’ websites—easier than measuring the success of advertising on social media, Youtube (GOOGL), or other platforms.

Amazon has already seen rapid growth with this type of advertising, showing grocery stores and other retailers who are relatively new to the online sales landscape just how profitable this advertising could be. Amazon’s “other revenue” category, which consists mainly of advertising, climbed 51% to $5.4 billion in its most recent quarter, compared to the same period a year earlier.

Revenue from online advertising for companies like Walmart and Kroger is still far behind Amazon, but catching up quickly. A recent study predicted that Walmart’s ecommerce advertising revenue will climb 73% this year to hit $849.4 million. A survey of brands advertising through Walmart showed that 67% of them plan to increase their spending on these advertising strategies.

Analysts expect that Walmart will bring in about 7% of US ecommerce ad spending by 2022, equal to about $2 billion. Walmart’s overall revenue just in the US is projected to hit $364 billion this year, so the company’s earnings from online advertising are still a small percentage of its overall earnings. However, Walmart, Target, Kroger, and smaller companies see enormous potential for growth in the world of ecommerce advertising.

Harley Davidson (HOG) has been working to gain ground in India for nearly a decade. But after another year of weak sales and manufacturing challenges, the American motorcycle maker has decided to pull out of the market.

This is part of Harley Davidson’s “rewire” plan, a method of streamlining its operations in order to cut costs. The Milwaukee-based company is in the process of slashing 700 jobs globally. It is also reducing the number of models it makes and is pulling out of markets where it is struggling. So far the plan seems to be working, as Harley Davidson beat expectations with its earnings report last month. The company’s earnings hit $120.2 million compared to $86 million a year earlier.

Harley Davidson had high hopes for India, a country of 1.3 billion people where two-wheeled transportation is extremely popular and the middle class is growing. There was an initial surge of sales when Harleys first arrived in India. However, during the twelve months ending in March, the company only sold 2,470 bikes in the country—about half the number it sold five years ago.

The top Harley Davidson model sold in India costs $88,000 after licensing fees and taxes. This is about 41 times higher than the average yearly income in India. Hero MotoCorp (HMCL:IN), an India-based motorcycle and scooter company, prices its most expensive model at just $1,500.

In addition to weak sales, Harley Davidson also faced regulatory difficulties in India. The country placed high tariffs on Harley motorcycles. Tariffs were originally 75% until they dropped to 50% in 2018. Harley Davidson shipped some of its high-end models from the US and put other models together in India at a factory outside New Delhi. With both these supply chains, Harley struggled with red tape and infrastructure that made shipping difficult.

Harley is closing its factory in India, and will not export nearly as many bikes as it used to. However, it has entered a partnership with Hero where the India-based company will develop and sell bikes with Harley logos, so the brand will not completely disappear in India.

"Most financial experts agree that the biggest risk is not investing at all. While saving money is important, inflation steadily eats away at savings over time."