There are no economic data reports scheduled for today.

Tomorrow, look out for September job openings and the October NFIB Small Business Index, which comes from a survey of hundreds of thousands of small business owners. It measures how they feel about the economy and the health of their businesses by tracking their plans to increase employment, make capital outlays, and more. The index gained 3.8 points in September to hit 104, highlighting continued optimism in the small business community.

There are no economic data reports scheduled for Wednesday because of the Veterans Day holiday.

On Thursday, look out for Core CPI, the October Consumer Price Index, the Federal Budget, and initial jobless claims. Jobless claims hit 751,000 last week, which is slightly lower than the week before, but still far higher than pre-pandemic levels. Continuing claims, or the amount of people still receiving benefits, were also down from the week prior.

To round out the week, the October Producer Price Index and the November Consumer Sentiment Index will be released. This metric shows how optimistic consumers are feeling about the health of the economy based on their saving and spending activity. The metric climbed slightly between September and October from 80.4 to 81.8, though in October 2019 it was 95.5.

Today, McDonald’s (MCD) reports its earnings. The company gave a mid-quarter sales update several weeks ago, sharing that its revenue was growing in the US, as well as in Japan and Australia. Much of this success was thanks to drive-thru business and delivery. The chain reported revenue drops in most of Europe, Latin America, and China. Investors will be interested to see if these trends have continued.

Beyond Meat (BYND) will also hand in its report card today. The plant-based meat maker has beaten expectations with both of its earnings reports so far this year. It has seen strong demand for its products from grocery stores though sales to restaurants remain relatively low due to the pandemic. The company’s shares have climbed about 548% since its IPO in May 2019.

Tomorrow Lyft (LYFT) will announce its latest results. Rideshare companies continue to struggle with weak demand due to the pandemic, but Lyft, Uber (UBER), and other startups dependent on gig-workers will be permitted to continue to classify their drivers as contractors rather than as employees in California.

Vroom (VRM), an ecommerce platform for buying and selling used cars, reports earnings on Wednesday. Vroom’s business model is well-suited to the pandemic for two reasons: People are investing in cars because they are wary of public transportation, and Vroom gives customers a way to shop for cars virtually without worrying about visiting lots. However, Vroom’s shares have been volatile this month and investors will be eager to gain more insight into how the company is performing.

On Thursday, Disney (DIS) reports its earnings. The media giant’s theme park business continues to suffer, but its streaming service, Disney+, which currently has 60.5 million subscribers, has been a bright spot for the company since it launched almost exactly a year ago. Disney+ will face an important test this month because subscribers who received access to the service for free through a partnership with Verizon (VZ) will soon face a choice between paying for the service and giving up their memberships.

Another week, another round of virtual events for you to enjoy. Learn about ETFs, how to network your way to success, and more—on LinkedIn, Twitter, and Zoom. Register in the SoFi app! 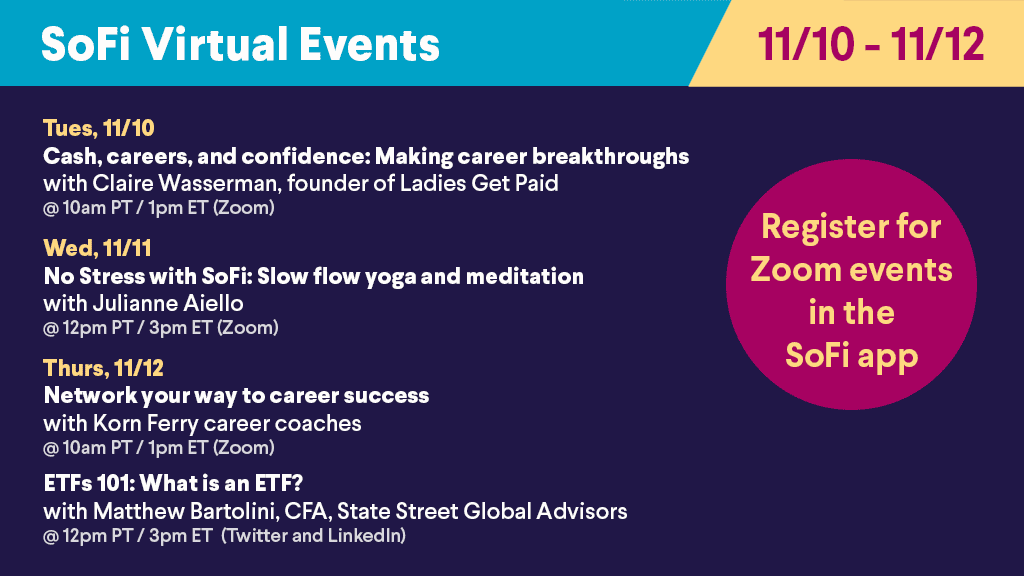 Restaurant and Bar Sales Are Down

Americans are drinking at home more as the pandemic continues. However, with bars and restaurants closed or operating at limited capacity, overall alcohol sales remain lower than they were pre-pandemic.

As of September, one in six restaurants in the US has shuttered long-term or permanently. A recent survey showed that 40% of restaurant owners expect they will be forced to close by 2021 without additional stimulus from the government.

This could mean that even when consumers are ready to return to drinking at bars and restaurants because a vaccine is available, these establishments simply will not exist anymore. Though eventually more restaurants would open up to meet demand, there may be a period of low demand for alcohol that continues for several years after the pandemic.

The Impact on Alcohol Industry Stocks

Shares of Diageo PLC (DEO), which owns brands including Johnnie Walker and Baileys, have fallen about 16% so far this year. Constellation Brands (STZ), which owns SVEDKA Vodka and Modelo, has seen its shares fall by 4%. Shares of Crimson Wine Group (CWGL), a publicly traded Napa vineyard, have dropped about 35%.

Usually alcohol sales at bars and restaurants surge during the holidays, but distributors predict this will not be the case this year. On the bright side for the industry, grocery store sales of alcohol were up 17% in September compared to a year ago. Direct-to-consumer alcohol sales are also climbing. Heading into the holidays, brands are working to release new products tailored to people who will be celebrating at home instead of at bars and restaurants this year.

Laying the Groundwork for a Public Debut

Kuaishou Technology, a Beijing-based video sharing and live streaming platform, has filed for an IPO in Hong Kong. The company is a competitor to ByteDance, the Chinese parent company of TikTok. Tencent (TCEHY) is one of Kuaishou’s main shareholders, owning a 21.6% stake in the company. Sequoia Capital China and Baidu are also shareholders.

Kuaishou is hoping to raise about $5 billion through its IPO and earn a valuation of about $50 billion. Kuaishou has hired Morgan Stanley (MS), Bank of America (BAC), and China Renaissance Holdings as sponsors for its public offering.

Kuaishou, which translates to “fast hand” in Chinese, was founded in 2011 by former Google (GOOGL) and Hewlett Packard (HPQ) engineers. It began as a platform to create and share GIFs. Two years later in 2013, the company added short-form video capabilities. In 2016, it launched a live-streaming video service.

Kuaishou operates the world’s second-largest short-video platform measured by average daily active users, after Douyin, ByteDance’s domestic version of TikTok. Kuaishou generated about $7.2 billion in revenue in 2019. During the first half of 2020, its revenue surged 48% compared to the same period a year earlier.

Kuaishou is planning to go public at a time when many of its fellow Chinese tech companies have faced regulatory battles at home and around the world. Last week, Ant Group suddenly suspended its $34 billion dual listing in Shanghai and Hong Kong because of concerns from Chinese regulators.

Kuaishou’s rival ByteDance has been engaged in high-profile disputes with lawmakers in the US and other countries. Most of Kuaishou’s users and operations are in China, which will make it less vulnerable to international tensions than ByteDance. However, some bans of Chinese apps in India have impacted Kuaishou’s business, and tensions between the US and China could make it difficult for Kuaishou to expand into the US market. Despite these potential headwinds, the company is moving forward with preparations for its IPO, and could make its debut as early as January 2021.