Will Rates Ever Go Up?

We have a healthy macroeconomic debate going on at my hedge fund these days.  It’s about interest rates.  Our chief economist, Mike Dooley, thinks the US economy is about to catch fire, and sees a real chance of 10-year rates over 3% by year end on the back of an imminent Fed hike in rates.  While Dr. Dooley has always been a perma-bull, this recent bout of optimism has me thinking he spent too much time in Golden Gate Park on April 20th.

Under the haze of smoke, they began to shout “10-year Treasuries at 3%!”

Global growth is slowing down.  In 2010, global gross domestic product (GDP) rebounded from 2009 lows back to levels we saw before the financial crisis.  Unfortunately, that rally has been short lived, as G7, world and developing Asia real GDP is now below pre-crisis levels. 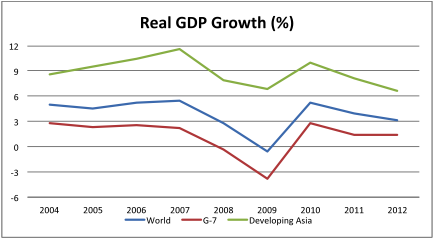 Expectations for 2013 are no better.  After a disappointing (relative to expectations) Q1 US GDP number, the consensus G10 2013 GDP forecast has fallen to just over 1%.  Take into account both that 1% of Q1’s US number came from inventory accumulation and high frequency consumption data looks weak, and you have the potential for a very disappointing US Q2 number and further downward revisions for global growth.

If rates are going to rise, it doesn’t look like it’s going to come from growth pressure.  But what about inflation?  Back when the Fed started printing money, there were no shortage of experts warning of the inflationary dangers this presented.  And it seemed logical.  Print money, debase the currency, cause inflation – it’s Austrian economics 101.  Only it hasn’t happened.  US and European inflation are below their pre-crisis trends – both perilously at stall speed in the 1% handle.  Von Mises is foiled again!  Better to be a Keynsian than an Austrian, I always say. 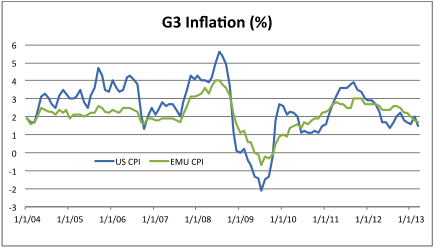 Maybe the recent sell-off in commodities – notably gold – is the market saying “Hey, there might not be any inflation coming…”  Maybe the sell-off in bitcoins is saying the same thing.  Or maybe it’s the market realizing both are still faith-based currencies.  I’m probably reading too much into things, here.

So if growth and inflation won’t force the Fed’s hand, what about unemployment?  We’re seeing the unemployment rate tick down – closer to the Fed’s 6.5% criteria for ending the accommodative policy to date and beginning a path toward rate hikes.  But is the 6.5% the right level, and will the Fed stick with it?

When the financial crisis hit in 2008, something interesting happened.  People became unemployed (expected), but they also left the labor force (unexpected).  The reduction in labor participation exacerbated the unemployment rate – had the labor force stayed constant, unemployment would have peaked at 9.2%, not 10%.

So what does this all mean for the markets?  Well, in our view, we don’t see the Fed moving until 2016, if then.  While US growth is slow, it’s positive and looks better than Europe and Japan.  This is a “goldilocks” market and bodes well for US equity, and for any credit with yield.  Insanely low cap rates could go even lower as the market also chases yielding hard assets.  Finally, and paradoxically, until the ECB begins to ease again, the Euro should outperform the dollar, and both will outperform the Yen.  Latam emerging markets are left out in the cold, here, as Europe weighs on their growth, but Asia will continue to benefit from China.